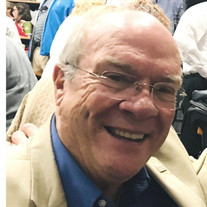 Wood Eugene Currens, known by colleagues as “Woody” and by friends and family as Bud, passed away on April 3, 2022. Born in Springfield, Ky in 1942, his mother, Eugenia Currens Gillespie died in childbirth and his father James Gillespie was called to serve his country in World War II. Woody was adopted by his loving aunt and uncle Juanita Hartford Currens and Florin Edward Currens who became his mother and father and raised him in Louisville Kentucky. He graduated from Atherton High School in 1960 and went on to attend Vanderbilt University. After college, Woody enrolled at the University of Louisville School of Dentistry and earned his D.M.D. in 1967. He later earned his M.Ed. at Temple University. During dental school, Bud reconnected with early childhood friend, Jennifer Whayne. They fell in love and married in June 1966. After dental school, he joined the U.S. Air Force and served as a Captain in the Dental Corps for 3 years at Hickam and Wheeler Air Force bases in Hawaii. In 1968, Bud and Jennifer welcomed their first son Allen Currens. After completing his service in the Air Force in 1970, they returned to Louisville and their second son, John “Chip” Currens was born. In 1970, Woody began his professional career as a dentist and was appointed to the faculty of the University of Louisville School of Dentistry. For the next 44 years, Woody served various positions at the school from assistant professor to full professor, to associate dean of several departments to acting dean of the dental school. In addition, he had a private dental practice, providing care to the people of Louisville as well as family and friends. During his tenure at the University of Louisville, Woody served in numerous leadership roles including Chairman of the University of Louisville Faculty Senate and on the University of Louisville Board of Trustees in 1986-1988. Awards and honors received over his career are too numerous to list. Bud and Jennifer have long been devoted members of St. Luke’s Episcopal Church. There, he served in many roles including on the Vestry and the Brotherhood of St. Andrews. Beyond work, Bud loved people! All people. He was thoughtful and kind to all who crossed his path—family, friends and strangers. As Mom said, “He would do anything for anyone at any time”. Not much brought him more joy than teaching. Over his 44-year career at the Dental School, Woody touched the lives of thousands of students as a caring impassioned advocate. He was was known for his friendliness, broad knowledge about so many things, his humor and quick wit. Above all, Bud loved and was devoted to his wife Jennifer, sons Allen and Chip, and 3 grand children, Eve, May and Lee. Besides people and family, other things that made him happy included winters in Alabama, the Doo-Dah, collections, bush hogging on the farm, movies… Bud is survived by his loving wife of 55 years, Jennifer Currens; their sons Allen (Louise) Currens and Chip (Andrea) Currens; grand children Eve Currens, May Currens and Lee Currens; sisters Betty (Dave) Morton and Anne Clark. A funeral service will be held at St. Luke’s Episcopal Church- 1206 Maple Ln, 40223 at 10:00 am Thursday, April 7. A reception will follow immediately at the church. Burial will be at Cave Hill Cemetery at 2:00 pm. All are welcome. Memorials can be made to the Franciscan Kitchen- 748 S. Preston St, Louisville, KY 40203. Arrangements under the direction of Pearson's, "Where Louisville Goes To Remember".

Wood Eugene Currens, known by colleagues as &#8220;Woody&#8221; and by friends and family as Bud, passed away on April 3, 2022. Born in Springfield, Ky in 1942, his mother, Eugenia Currens Gillespie died in childbirth and his father James Gillespie... View Obituary & Service Information

The family of Wood Eugene Currens created this Life Tributes page to make it easy to share your memories.

Wood Eugene Currens, known by colleagues as “Woody” and by friends...

Send flowers to the Currens family.