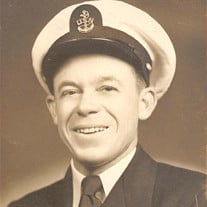 William “Bill” Wester passed away peacefully on August 2, 2019. He was born on March 11, 1916 in Butler County; one of thirteen children. He left home in 1939 to join the Navy and credits the service with teaching him to read and write. Assigned to the USS Salt Lake City, Bill served aboard the ship until she was struck from the Naval Vessel Register in 1948. On December 7, 1941, the Salt Lake City was returning to Pearl Harbor and was to moor on December 8 where the USS Arizona had been the day prior. Bill would participate in many of the significant Pacific campaigns and surface actions during World War II, including the Doolittle Tokyo Raid, Guadalcanal, Iwo Jima, Okinawa, and the atomic testing efforts after the war ended. Bill also served during the Korean War while stationed in Japan. Serving 20 years in the Navy, he retired as a Chief Petty Officer and moved to Oregon to work in the lumber industry until his family convinced him to come back to Kentucky. Back home, he devoted much of his time to volunteering for the Healing Place, Kosair and Wayside Christian Missions. He was a member of the Beargrass Christian Church, Zachary Taylor Post 180, Fleet Reserve Derby Branch 177, Middletown VFW Post 1170, an award-winning ballroom dance champion and was the 2000 Jefferson County Senior Citizen of the Year. Living independently until after the age of 100, he moved into the Carl M. Brashear Radcliff Veterans Center to be closer to his fellow veterans. It was there that he received his “final roll call.” He was proceeded in death by his father, Willie Wester and mother, Ethel Wester, wives, Dorothy and Kathleen and all his siblings. He is survived by nieces and caregivers Pam Panter and Brenda Leon and other nieces and nephews. Funeral service will be 10 a.m., Saturday, August 10th at Pearson's, 149 Breckenridge Lane, burial to follow with full military honors at Floydsburg Cemetery. Visitation will be 5-8 p.m., Friday, August 9th at Pearson's with "Two Bell Ceremony at 7 p.m. A special thanks to the staff at Carl M. Brashear Radcliff Veterans Center for their care and support. Expressions of sympathy can be made to the Carl M. Brashear Radcliff Veterans Center, 100 Veterans Drive Radcliff, Kentucky 40160.

The family of William E. Wester created this Life Tributes page to make it easy to share your memories.

Send flowers to the Wester family.