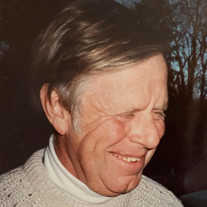 William H. Veeneman III, 82, of Louisville died Sunday, Nov. 28, 2021, at Norton Brownsboro Hospital in Louisville after a brief illness. He was born Feb 4, 1939, in Three Rivers, Michigan, to the late William H. Veeneman Jr. and Jeanne Weir Veeneman. In addition to his parents, he was preceded in death by his brother, Thomas Dale Veeneman and his loving wife of 33 years, Johanna Hurst Veeneman. A lifelong Roman Catholic, he was a graduate of Trinity High School and the University of Notre Dame, a First Lieutenant in the U.S. Army and retired from Frank Otte Nursery. He is survived by his sister Elizabeth Hamilton, Richmond, Virginia and his brother Charles Terry Veeneman, Louisville, His three daughters, Ellen (Bill) Oakley, Johanna (Dan Carter) Veeneman, and Mary (Donald) Cecil all of Louisville. Four grandchildren, Cristin Oakley and Mary, Sarah and William Cecil all of Louisvlle. Several nieces, nephews, great-nieces and nephews, and extended family members and friends. Visitation 4-7 PM Friday, Dec. 3, 2021 at Pearson's, 149 Breckenridge Lane with private family interment at Cave Hill Cemetery. In lieu of flowers, the family requests expressions of sympathy in the form of contributions to the James Graham Brown Cancer Center.https://www.uoflbrowncancercenter.org/ways-support Arrangements under the direction of Pearson's, "Where Louisville Goes to Remember".

The family of William H. Veeneman III created this Life Tributes page to make it easy to share your memories.

Send flowers to the Veeneman family.