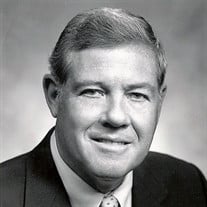 William Doherty Tafel, Sr., age 92, died peacefully at home on April 1, 2021 surrounded by his wife and family. Born on May 21, 1928 to Mary Doherty and Paul C. Tafel, Sr., Bill was one of six children, all of whom were raised on Orchard Hill in Louisville, Kentucky. He was predeceased by his parents and siblings Paul C. Tafel, Jr., Patricia Tafel Kirchdorfer, Mary Doherty Tafel Barnum, Elizabeth Tafel Steele and John A. (Jack) Tafel. Bill played football and graduated from Male High School. He was a member of The Athenaeum Literary Association and Castlewood Athletic Club. Following his graduation from Notre Dame in 1950, he served three years in the United States Air Force as a First Lieutenant in Japan and Korea from 1951-1954. He married Mildred Lee Gill in December 1952 at the Air Force Base Chapel in Tachikawa, Japan where they lived until 1954 when they returned to Louisville. From 1954 until 1982, he served as Executive Vice President and Sales Manager of Tafel Electric and Supply Company with offices in Louisville, Lexington and Nashville. When the 99-year-old company was sold to Westinghouse in 1985, he joined the Walter Wagner company specializing in commercial and industrial real estate. He was president of the Electrical Clearing House of Louisville and a past director of the Louisville Rotary Club. Bill was very active with his business, civic and church activities, including St. MAM’s, and he served as Director of Kentucky Independent College Foundation and Director of the Jefferson County Republican Party. He was a member of The Dennbarr Club, The Pendennis Club, Louisville Country Club and a past president of Harmony Landing Country Club . Bill never met a stranger and was always initiating conversations with others. He loved sports, enjoyed tennis and golf, and constructed a paddle tennis court at his home which brought years of enjoyment to the family and neighbors. Babe and Bill were always the first onto the dance floor and loved to jitterbug to big band music. His devotion to his family was the most important part of his life. Bill was always there, and always willing to do anything to help others. He loved his Irish and German heritage and was instrumental in organizing the first International Tafel Family reunion in 1976, networking with cousins from four continents and 15 countries. He is survived by his wife of 68 years, Mildred Lee Gill Tafel, better known as Babe, and their six children, Barbara Tafel of Louisville, Ellen Tafel Northen (Buzzy) of Wilmington, NC, William, Jr. (Rebecca), Bruck (Rosann), Bobby and Danny (Angela), all of Louisville. He is also survived by 13 grandchildren – USCG Commander Grant Thomas (Sally Netter), Clay Thomas, Lee Thomas Harring (Rob), Sarah Brucker Northen Baldock (Beau), Blair Northen Williamson (Sam), Rachel Tafel Voigt (Jake), William Tafel III (Katie), Mary Gwen Tafel Walker (William), Claire Tafel (Chris Beach), SPC Charles Tafel, Calvin Tafel, Daniel Tafel, Thomas Tafel, and nine great grandchildren – Catherine and Max Thomas, Maggie, Quinn and Bo Harring, Sadie and Josie Williamson, and Hayes and Brooks Voigt. The family would like to extend special thanks to Bettie Jackson for her love and support over the many years. Additional thanks to Hosparus caregivers that provided support over the last several weeks. A private funeral service will be held at Holy Trinity Catholic Church with burial in Calvary Cemetery. For those that wish, in lieu of flowers, please make donations to St. Vincent de Paul, P.O. Box 17126, Louisville, KY 40217 or Hosparus Health, 3532 Ephraim McDowell Drive, Louisville, KY 40205.

William Doherty Tafel, Sr., age 92, died peacefully at home on April 1, 2021 surrounded by his wife and family. Born on May 21, 1928 to Mary Doherty and Paul C. Tafel, Sr., Bill was one of six children, all of whom were raised on Orchard Hill... View Obituary & Service Information

The family of William Doherty Tafel Sr created this Life Tributes page to make it easy to share your memories.

Send flowers to the Tafel family.