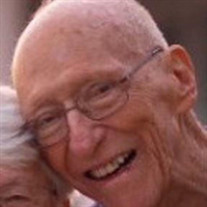 William D. Shore (91) husband of JoAnn (Fravel) Shore; father of Scott Shore (Kristina), James Shore (Laura) and Gena Smith (Darr); grandfather of Songja, Kindell, Kyra, Jeannie, Evelyn, Darr Jr. and Hunter; and great grandfather of Liam, Kylie, Eli, Luke, and Caleb, passed away peacefully on August 24th in Ventura California. Born on October 17, 1929, in Cleveland Ohio, Bill was the son of the late Dwight and Josephine Shore. He graduated from the University of Louisville with a BS in Chemistry in 1952. He and his beloved bride, JoAnn, were married in Louisville on August 29, 1952. Together they went to Germany where he served a two-year tour of duty in the U.S. Army Medical Corps. Returning to Louisville, he joined Air Reduction Corporation (Airco) in 1954 as a member of its sales force. His sales territory expanded to various regions of the United States prompting moves to Dallas Texas, Weston Connecticut and finally Malvern Pennsylvania. Leaving Airco, he and the late Mr. Gordon Scott founded the Society of Professional Drivers. He developed and sold correspondence safety courses for fleets of cars, buses and trucks. He initiated the concept of “lights on for safety,” which is now the standard for vehicles. Bill devoted his life to God and was a founding member of The Church of the Saviour in Wayne PA in 1972. As the church and his faith grew, he taught adult Sunday school, AWANA Bible Club, youth ministry, a premarital class and served as an elder. His passion was shepherding men. Bill facilitated countless morning small groups and discipled men leading to his common refrain “blessed and spoiled” and “How big is your God? Bigger than that!” Bill loved spending time with JoAnn, his family, and his orchids. He was a foodie before there was such a thing, sharing “highly edible” meals at his home and at several favorite eateries with countless friends and families. There will be a Memorial Service (Celebration of his Life) at The Church of the Saviour, 651 North Wayne Avenue, Wayne Pennsylvania on Monday, September 6th at 4pm in the sanctuary. In lieu of flowers, contributions may be made in his memory to IHS Global (www.ihsglobal.com/give), a worldwide ministry that equips Christian healthcare workers to be witnesses of Jesus. IHS Global was founded by Dr. Bob Snyder, a longtime friend who will be sharing at the service.

The family of William Dondore Shore created this Life Tributes page to make it easy to share your memories.

Send flowers to the Shore family.