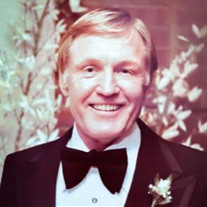 William Charles (Bill) Ridge, Jr., age 100, passed away at his home in Louisville on the morning of Friday, April 9, 2021. He is the son of William C. and Anna Ridge and was born in Louisville on May 9, 1920. After graduating from Male High School in 1938, attending college, and working for Joseph Seagram’s & Sons, Bill enlisted in the United States Army Air Force. During WW II he narrowly escaped a tragic ending, because his seat on a fatal flight to Puerto Rica was reassigned. The aircraft crashed without any survivors. Being a member of the “Greatest Generation” he was a fantastic example of what hard work and tenacity could accomplish. A pinnacle of success to his family. After his military service, Bill returned home to Louisville and started a home building business. He was very proud of building more than 1,000 homes, as well as developing subdivisions and he owned and built several apartment buildings. Never retiring, he remained active in real estate until his death. A man of honor and integrity words never failed Bill. In 1984 Bill wrote a book on his beloved game of golf entitled “The Geometric Approach to Golf” which was sold all over the world, as far away as Japan and Australia. He authored numerous short stories and a book on anecdotes. He also served on the Board of Directors of New Horizons. Bill always stayed involved in life and family. He was a shining light for his entire clan. He had many stories to tell having been born in 1920, including one about carrying camera equipment for a news service to get into the Kentucky Derby press box when he was 16. One of his grandchildren’s favorite memories was of Christmas Eve when Bill would always arrive with pockets full of red striped candy canes. His grandchildren adored his kindness and genuine love of family. He attained many titles - pilot, business man, and author, but the most important was “Grandfather”. He will be sorely missed by all who knew him and will not be forgotten. Bill was preceded in death by his parents, William and Anna; his sisters Marian and Patricia; and his brother Don, a business partner and fellow real estate developer; and grandson Jack Wheatley, III. Bill is survived by his daughter, Linda Ridge Roberts (Bissell) of Prospect and two sons, William C. Ridge, III and Gary D. Ridge (Tonya) of Louisville, nine grandchildren, thirteen great-grandchildren, one great-great granddaughter. A private graveside service will take place at Calvary Cemetery in Louisville. Arrangements to be handled by Pearson’s of St. Matthews. Memorial donations may be made to St. Jude Research Children’s Hospital, 501 St. Jude Place, Memphis, TN 38105.

William Charles (Bill) Ridge, Jr., age 100, passed away at his home in Louisville on the morning of Friday, April 9, 2021. He is the son of William C. and Anna Ridge and was born in Louisville on May 9, 1920. After graduating from Male High... View Obituary & Service Information

The family of William Charles Ridge Jr. created this Life Tributes page to make it easy to share your memories.

Send flowers to the Ridge family.