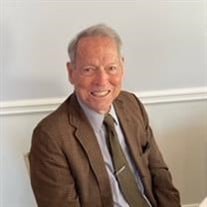 William Baldwin Ogden died Monday, April 25, 2022 at his home in Ada, MI, surrounded by his wife and her family. He was born March 6, 1938, in Louisville, KY to Jean Hollingsworth Stewart Ogden and Squire Redmon Ogden. He grew up in Louisville, graduated from Phillips Academy, Andover MA, in 1956. He was a graduate of Yale, 1960, Silliman College, where he was a member of Fence Club and the rowing team; and was awarded an LLB from Vanderbilt law School, 1963. He clerked for US Circuit Judge Shackelford Miller, Jr. After working at the law firm Ogden, Newell and Welch in Louisville, he moved to Washington, DC, to work with the Federal Trade Commission. He was later appointed, in 1984, Administrative Law Judge for the Social Security Administration, Grand Rapids, Michigan office, from which he retired in 2014. Baldwin married Judy Ann Windish October 29, 1994, in Louisville, KY. He was preceded in death by his parents, younger brother John Carter Ogden, nephew Robert Allen Ogden, and step-grandchild Krissy Noland. He is survived by his wife, his older brother Stewart (Joan), a step-daughter Michelle Adams (Bridget), cousin Anne Ogden, former sister-in-law Patricia Clark Ogden, niece Patricia Hollingsworth Ogden, niece the Very Rev. Heather VanDeventer; and step-grandchildren – Josh Adams, Meghan Keith, Chauntel Louive, and Kassey Noland. Baldwin spent good times hiking, biking and skiing, but he especially loved sailing on Lake Michigan, and wintering at Long Boat Key, Florida and Kiawah Island, South Carolina. He leaves behind his beloved boat SeaWolf II. In earlier years he spent several summers at Camp Petosegga in Northern Michigan. During his time in Michigan, he created and managed Northern City Properties, a real estate development firm. Baldwin was a member of the White Lake Yacht Club as well as the University Club in Grand Rapids and the River Valley Club in Louisville, Kentucky. He had been a member of the Les Cheneaux Club in Michigan and the Louisville Country Club. He was a life member of the Filson Historical Society and the Speed Art Museum in Louisville. He was a member of St. Mark’s Episcopal Church, Grand Rapids. Funeral service will be held 11 a.m., Saturday, May 14th at St. Francis in the Fields Episcopal Church, 6710 Wolf Pen Branch Rd at US HWY 42 with reception to follow in Graves Hall. In lieu of flowers gifts may be made to, Music Program - St. Francis in the Fields Episcopal Church, 6710 Wolf Pen Branch Rd. Harrods Creek, KY 40027.

William Baldwin Ogden died Monday, April 25, 2022 at his home in Ada, MI, surrounded by his wife and her family. He was born March 6, 1938, in Louisville, KY to Jean Hollingsworth Stewart Ogden and Squire Redmon Ogden. He grew up in Louisville,... View Obituary & Service Information

The family of William Baldwin Ogden created this Life Tributes page to make it easy to share your memories.

Send flowers to the Ogden family.