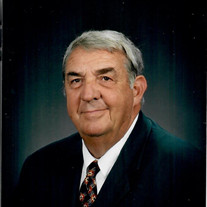 William Kenneth Lutz “Ken”, of Louisville, Kentucky & Siesta Key, Florida passed away peacefully on December 26, 2020 at the age of 86. Ken was born to William Christian Lutz and Vioris Brown Lutz on November 2, 1934. He attended DuPont Manual High School. Ken graduated from the University of Kentucky College of Commerce, where he was a member of the Sigma Chi Fraternity. He lettered for the University of Kentucky football team, playing 2 years for Bear Bryant and 2 years for Blanton Collier. In 1956 he married the love of his life, Mary Maxine Thompson. Ken earned a commission in the US Army, where he served two years in the 602nd Field Artillery in Fort Sill Oklahoma where he was a firing battery officer, executive officer and battery commander. He also played football for the Fort Sill Cannoneers. After the army, he worked as a cost analyst for US Steel in Pittsburgh, PA. In 1961 he returned to Louisville to join his father at the Jenner Company. For years he worked for the Equitable Life Assurance Society and earned a CLU designation. After that, Ken was a consultant at Mercer, Inc. for 30 years until retirement. Since 1961, he was an active member of Christ Church United Methodist, serving as Boy Scout leader, youth teacher, and on the Administrative Board. He was a life member of the UK Alumni Association. He was also involved in the Estate Planning Council of Louisville, Fellowship of Christian Athletes, Wildwood and Standard Country Clubs. He coached Lyndon Little League football and 9th grade football at Ballard High School. Additionally, Ken was a Board Member of the Kentucky Athletic Hall of Fame, the Louisville Theatrical Association & the Louisville Jaycees and a Kentucky Colonel. Ken was preceded in death by his parents, William Christian Lutz and Vioris Brown Lutz. Ken is survived by his wife of 64 years, Maxine Thompson Lutz, his two sons, Stephen Kenneth Lutz (Shannon Brady) and Scott Thompson Lutz (Karen Gurwell), brother Richard Brown Lutz (Nancy Hubbard), as well as 7 grandchildren (James, Collin, Molly, and Meaghan Lutz & Katelyn Strauch, Scottie Lutz and Madison Oehlert) and one great grandchild (Joseph Scott Strauch). Ken loved playing golf, coaching youth football and sunsets with family and friends at Siesta Key Beach. Through years of health challenges, Ken’s loving family and many dear friends celebrated life with him, while he was living. Funeral services will be held at 1:00 PM on Wednesday December 30th, 2020 at Christ Church- United Methodist located at 4614 Brownsboro Rd St Matthews KY 40247. In lieu of flowers, memorials may be given to The Fellowship of Christian Athletes for its high school ministry at 406 Blankenbaker Parkway, Suite G, Louisville, Ky, 40243.

The family of William Kenneth "Ken" Lutz created this Life Tributes page to make it easy to share your memories.

Send flowers to the Lutz family.