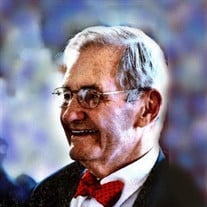 William Pierce Hoagland, Sr., 91, was welcomed into the arms of his Lord on Sunday morning, September 22, 2019. He was a devoted husband to Adeline (Addie) and a loving father, grandfather and great-grandfather. Bill was a graduate of Louisville Male High School, a member of ALA, and also a graduate of the University of Virginia, where he was a member of the DKE fraternity. He served in the U.S. Navy, on the USS Missouri. Bill was a Senior Vice President and Treasurer of Commonwealth Life Insurance Company. He was a member of the Louisville Country Club, the Pendennis Club, the Pyramid Trust, and the Den Bar Club. He was also a long-term Rotarian. Bill and Addie were members of Second Presbyterian Church in Louisville and First Presbyterian Church in Naples, Florida. As residents of Naples, they belonged to the Yacht Club and the Country Club of Naples. A lover of music, Bill was a gifted pianist. He could play any request by ear. Rarely a day went by without music floating throughout their home. He and Addie enjoyed playing round after round of golf, and in their earlier years, tennis, accompanied by Bill’s wicked backhand. Always eager to learn new things, Bill learned how to fly an airplane. He also took multiple Spanish classes both in Louisville and in Naples. He engaged many innocent bystanders in dialogues in Espanol. Bill is survived by his wife, Adeline, of sixty-eight years. They are blessed with four children: Van, Margee, Billy (Marte), and John (Elizabeth). They also have twelve grandchildren and eighteen great-grandchildren. A celebration of Bill’s life and legacy will be 10 am Friday, September 27th at Second Presbyterian Church, 3701 Brownsboro Road, with private burial to follow at Cave Hill Cemetery. Visitation 4-7 pm Thursday, September 26th at Pearson’s, 149 Breckenridge Lane. In lieu of flowers, expressions of sympathy may go to the Parkinson’s Support Center of Kentuckiana or any charity of your choice.

William Pierce Hoagland, Sr., 91, was welcomed into the arms of his Lord on Sunday morning, September 22, 2019. He was a devoted husband to Adeline (Addie) and a loving father, grandfather and great-grandfather. Bill was a graduate of Louisville... View Obituary & Service Information

The family of William Pierce Hoagland Sr. created this Life Tributes page to make it easy to share your memories.

William Pierce Hoagland, Sr., 91, was welcomed into the arms...

Send flowers to the Hoagland family.