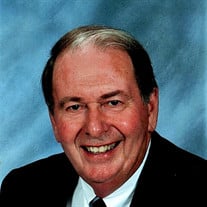 William Ray Gilpin, 83, of Prospect passed away October 19, 2019. Ray was born June 22, 1936 in Klamath Falls, Oregon to the late William Henry and Lucille Eden Gilpin. Ray was a loving husband, father, grandfather, uncle and brother. Ray was a 1954 graduate of Eastern High School and 1959 graduate of the University of Kentucky with a degree in business. He was an active member of the Sigma Alpha Epsilon fraternity. He also served as an army lieutenant called to active duty in the 100th Division. Ray had a successful business career as a manager at Reynolds Metal and Metal Sales Manufacturing Company. He completed his career as a realtor for Coldwell Banker. Ray was an active member of Broadway Baptist Church where he served as a deacon for a number of years. An avid golfer and member of Glen Oaks Country Club, Ray and wife Judy enjoyed their monthly dinners with the Brownsboro Farms group. As a lifelong UK fan, he loved cheering on his beloved Wildcats. Left to cherish his memory are his wife of fifty eight years, Judith "Judy" Ballard Gilpin, sister Jacqueline Gilpin John (V.I.), brother Kenneth Gilpin, children Kent Gilpin, Jennifer Mace (Charles), Tricia Davis (Jeff), grandchildren Logan Davis, Katie Mace, Caroline Mace, Liam Davis, Luke Davis and niece Alicia Gilpin. His funeral service will take place at noon on Saturday, October 26th at Pearson's 149 Breckenridge Lane with burial to follow at Floydsburg Cemetery in Crestwood, KY. Visitation will be Friday, October 25th from 3-7 PM at Pearson's. Expressions of sympathy may be made to Broadway Baptist Church or Blessings In A Backpack.

The family of William Ray Gilpin created this Life Tributes page to make it easy to share your memories.

Send flowers to the Gilpin family.