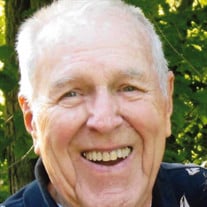 William W. Gault, 91, of Prospect, KY, formerly of LaGrange, died peacefully at home on Wednesday, November 18, 2020 surrounded by his loving family, his favorite music, and lots of happy memories. He was the husband of Waltraud (Waldi) Konhäuser Gault, sharing nearly 56 years of marriage. They met in Paris and married in London before returning to the United States to begin their family. Bill was born in Beloit, OH on New Year’s Day in 1929 to the late John T and Clara Winans Gault. He graduated from Marietta College and received a Masters in Business Administration from Northwestern University School of Business in Chicago. He served in the Marine Corps during the Korean War. He was an executive at Eminence Speaker in Eminence KY from 1972 until his retirement in 1997. Along with Waldi, Bill made his grandchildren the center of their world. They made many wonderful memories taking them to their sports games, celebrating their birthdays, playing in the fields outside their LaGrange home, and watching silly television shows. Their home in Hilton Head Island was a magical retreat for all of them. He will always be remembered for his ability to tell a great joke or a funny story. His smile and infectious laugh will be missed forever. Bill is survived by his loving wife, Waldi, son, Patrick of Louisville, daughter, Janice (Jim Vander) of Villanova, PA, son, Robert (Mirth) of Orland Park, IL; grandchildren, Philip, Marshall, and Malcolm Gault, Caroline, William and Eliza Vander, Adam (Sherrie) of St John, IN, Emma, and Alec Gault; and great-grandchildren, Asher and Shea Gault; dear friend, Kate Farrow of Crestwood; sister-in-law Thelma Gault of Eminence; brother in law, Reiner Konhäuser of Schwandorf, Germany and numerous nieces and nephews as well as many close friends all over the world. He is predeceased by his son, William, and his brothers, John (Jack), Robert (Bob), and his sister, Janet VanDuser. Contributions in Bill’s memory can be made to Hosparus of Louisville (3532 Ephraim McDowell Drive, Louisville, KY 40205). The family is beyond grateful for all the care, compassion, and friendships from the caregivers of Hosparus and Home Instead to care for Bill in his last several months.

William W. Gault, 91, of Prospect, KY, formerly of LaGrange, died peacefully at home on Wednesday, November 18, 2020 surrounded by his loving family, his favorite music, and lots of happy memories. He was the husband of Waltraud (Waldi) Konhäuser... View Obituary & Service Information

The family of William W. Gault created this Life Tributes page to make it easy to share your memories.

Send flowers to the Gault family.