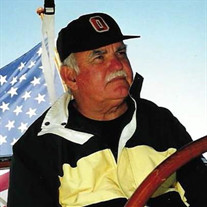 William David Dunn, Sr. Louisville - William David Dunn, Sr., 88, of Louisville passed away peacefully at Baptist Health on Tuesday, July 16, 2019 following a brief illness. A native of Columbus, Ohio, he was born August 3, 1930 to the late Joseph Mitchell Dunn and Beatrice Becker Dunn. Bill was a dedicated salesman of 31 years for the H.B. Fuller Company, a sailor, devout Catholic, passionate volunteer, music fanatic, and lifelong Buckeye fan. Above all else though, Bill was a devoted family man. Despite her insistence that they "not complicate things" when he first asked her on a date, Bill was successful in wooing Gillian Getty Polk, Gigi, starting in 1958. Married in 1959, their 60-year marriage was his proudest accomplishment. Bill and Gigi's house has always been the hub for countless celebrations that gave Bill the opportunity to express his love for those who mattered most. In the last days of his life he repeatedly expressed how lucky he was. Along with his parents, Bill was preceded in death by his brother Joseph M. Dunn. Those left to cherish his memory are his wife of 60 years, Gigi; daughters Nancy (James) Roberts, Kelley Dunn, Suzanne (Bob) Ziegenfuss; sons W. David (Becky) Dunn, Jr. and J. Mitchell (Jill) Dunn; 12 grandchildren: Beth Wolfe; Will (Maria), Tom, Annie & Elizabeth Roberts; Meg & Molly Ziegenfuss; Katharine, Billy & Liza Dunn; Becker & Lily Dunn; four great-grandchildren as well as several nieces and nephews; and his sister, Nancy D. Williams. The family would like to offer our sincere gratitude to Theo Johnson and the dedicated staff of the Baptist Health Palliative Care unit, who helped make Bill's final days peaceful and pain-free. Visitation will be held from 4-7 p.m., Friday, July 19, 2019 at Pearson Funeral Home, 149 Breckenridge Lane, Louisville, KY. A Mass of Christian Burial will be held at 10 a.m., Saturday, July 20 at St. Agnes Church, 1920 Newburg Road, Louisville, KY with burial to follow in Cave Hill Cemetery. The family requests that expressions of sympathy be made in the form of donations to the Olmsted Parks Conservancy or to Baptist Health Palliative Care

The family of William David Dunn created this Life Tributes page to make it easy to share your memories.

Send flowers to the Dunn family.