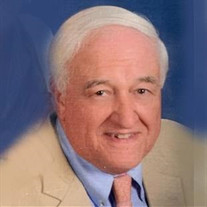 William Grinstead Duncan, Jr passed away peacefully on Friday August 16, surrounded by his loving family at Baptist Palliative Care. Bill was born on April 1, 1943 in Louisville, Kentucky to William Grinstead Duncan and Alice Feik Duncan. He attended Waggener High School and graduated from the University of Louisville with a Bachelors of Science in Commerce. He was a member of Delta Upsilon fraternity. He began his professional career at Liberty National Bank, and retired in 1991 as Senior Vice President and Manager of the Trust Department. Along with his colleague, Barrett Birnsteel, Bill co-founded the Investment Division of Kentucky Home Trust in 1991, and then First Bankers Trust in November of 2000. Bill's clients were like family to him; he was equally devoted to the wider Louisville community through his service to the Bellewood Home for Children and the Gheens Foundation. Barry Allen, the President and Treasurer of the Gheens Foundation, described Bill's nearly 20 years of service in a way that resonates with the dedication he showed in all his earthly endeavors: "Bill demonstrated at all times a sensitivity and unfailing commitment to his work." Bill is preceded in death by his parents and his brother, Stuart English Duncan, II. He is survived by his wife of 55 years, Pamela Stone; his daughter, Julia Clements; sons, Will (Allison) and Robert (Becky); cousin, Sally Ross; nieces, Anne Duncan Matthews and Mary Duncan Baer; and 5 grandchildren: Kate, Mary Clare, and William Duncan; Van Clements; and Vaughan Duncan. Funeral service will be 11 AM Tuesday , August 20 at Second Presbyterian Church 3701 Old Brownsboro Road, with a reception to follow. Visitation 4-7 PM Monday, Aug. 19 at Pearson's 149 Breckenridge Lane. In lieu of flowers, gifts can be given to the Cabbage Patch Settlement House 1413 S. 6th Street Louisville, KY. 40208, Crescent Hill Ministries 150 State Street Louisville, KY 40206, or Second Presbyterian Church 3701 Old Brownsboro Road Louisville, KY 40207.

The family of William Grinstead Duncan Jr created this Life Tributes page to make it easy to share your memories.

Send flowers to the Duncan family.