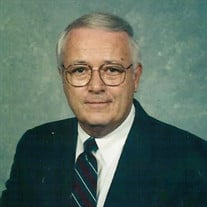 Dr. William P. Cubine, 86, passed away Saturday, August 17, 2019 at the Hosparus Inpatient Care Center after an extended illness. He was born in Louisville, KY January 18, 1933 to Charles Patrick and Lillie Allen Cubine. He is preceded in death by his parents, his brothers Charles, Deroy, David and John Allen Cubine. He was a graduate of Male High School, Georgetown College, Georgetown, KY, with graduate degrees from The Southern Baptist Theological Seminary, The University of Kentucky, a doctorate degree from The Lexington Theological Seminary, Lexington, KY and graduate study at Oxford University. He served churches in Kentucky at Jamestown Baptist Church, Jamestown, KY 1958 - 1960, Burlington Baptist Church, Burlington, KY 1960-1965, Central Baptist Church, Paris, KY 1965-1978 and Immanuel Baptist Church, Paducah, KY 1978-1991. He returned to Louisville in 1991 to serve as Seminary Pastor at The Southern Baptist Seminary and later would serve as Senior Professor of Pastoral Ministry. He received the Finley and Louvenia Edge Award for Teaching Excellence. After leaving the seminary in 1998, he taught in the Sociology Department at the University of Louisville until 2010. He volunteered as a chaplain at Wayside Christian Mission. He served as interim minister for churches during his return to Louisville including in Georgetown, Lexington, LaGrange and Paris, KY. He was a former Trustee of Georgetown College. He served on the Board for Western Baptist Hospital, Baptist East Hospital and Baptist Healthcare Systems for 18 years. He was active in many clubs and community organizations during his years in the pastorate. He was a member of Second Presbyterian Church and a former member of Broadway Baptist Church. A special gratitude to his Hosparus Team and to Dr. Esther Costel for their compassionate care. He is survived by his wife of 63 years Mary E. "Missy'' McMakin Cubine, his son Mark (Susan Cheatwood) Cubine of Vincent, AL, and his daughter Susan (Chip) Snyder, his grandson Henry William Snyder, all of Louisville, and a brother Paul (Zella) Cubine, Springfield, KY. Memorial service will be held 11 AM Monday, Aug. 19, 2019 Second Presbyterian Church, 3701 Old Brownsboro Road with a reception to follow. Private burial at Cave Hill Cemetery. Memorial gifts to The Cabbage Patch Settlement House, 1413 South Sixth Street, Louisville, KY 40208 or Whosoever Will Men's Class Foundation, PO Box 299, Talladega, AL 35160

Dr. William P. Cubine, 86, passed away Saturday, August 17, 2019 at the Hosparus Inpatient Care Center after an extended illness. He was born in Louisville, KY January 18, 1933 to Charles Patrick and Lillie Allen Cubine. He is preceded in... View Obituary & Service Information

The family of Dr. William P. Cubine created this Life Tributes page to make it easy to share your memories.

Send flowers to the Cubine family.