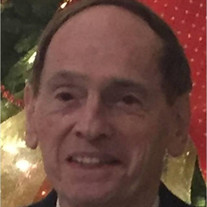 William Pfingst Carrell, age 84, of Louisville died on April 26, 2020 following a broken hip and other health issues earlier this year. Bill was born on August 12, 1935 in Louisville to Col. & Mrs. Elmer Nevin (Mary Frances Pfingst) Carrell. He was in the first co-ed graduating class of Atherton High School (1953) after which he graduated from Davidson College (1957). Following his service as a 1st Lieut. in the U.S. Army in Virginia in the late 1950s, he obtained an MA in Foreign Affairs at the University of Virginia (1962). His athletic prowess first appeared when he achieved a golf handicap of 4 at age 14. At Davidson, he held the Southern Conference record in breaststroke. He was also a competitive tennis player until arthritic issues took him off the court in 2013 and subsequently led to a myriad of maladies that plagued him during the last four years of life. On Dec. 28, 1960, he married Ann Mayhew Eagles of Anchorage, who predeceased him after nearly 58 years of marriage. They sang in church choirs for over forty years and were, most recently, members of St. Francis in the Fields Episcopal Church. After completing his graduate work, he taught at Suffield Academy in Suffield, CT and at Western Reserve Academy in Hudson, OH before they returned to Louisville, where he became President of The Carrell-Rogers Company, Inc., founded by his grandfather Brig. Gen. Daniel M. Carrell in 1893. His father, Elmer, was Jefferson Circuit Court Clerk (1963-1969), and his uncle Maj. Gen. Allan K. Carrell was Adjutant General of Kentucky (1967-1968). Carrell antecedents served in every war from WW II back through the Revolution, except for the Mexican War of 1848. Bill was a member of the Kentucky Society of Colonial Wars, where he served on its Council, and the Jamestowne Society. He was a third generation member of the Pendennis Club, the Filson Club Historical Society, and the Rotary Club of Louisville–where he served on its Board (1973-1975), was a member of the 1912 Society, and a Paul Harris Fellow. He was also a former member of the Louisville Boat Club. He is survived by his son, William Pfingst Carrell II; his brother & sister in-law Daniel Allan and Janis Carrell of Richmond, VA; two nieces, Molly Carrell (Brad) Pierce of Daufuskie Island, SC and Courtney Adele Carrell (David) Diamond of Dallas, TX; and two grand-nieces and a grand-nephew. Due to the current pandemic, a private interment was held on May 2nd at Cave Hill Cemetery. A memorial service will later be held at St. Francis in the Fields Episcopal Church. Expressions of sympathy may be made to St. Francis in the Fields Episcopal Church; Davidson College, Davidson, NC; or the Rotary Club of Louisville.

The family of William Pfingst Carrell created this Life Tributes page to make it easy to share your memories.

Send flowers to the Carrell family.