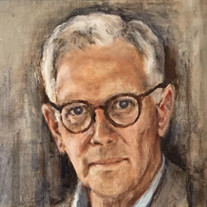 William Hoke Camp, Jr., 96, was born on November 19, 1924 in Louisville, KY. He died peacefully on March 19, 2021. He is survived by Katherine Smith Camp, his wife of ten years, and his children Henry Camp (Missy), Laurie Vieth (George), and Jim Camp (Wendy) of Oak Ridge, NC. He is also survived by thirteen grandchildren and two great-grandsons. His grandchildren are Mary Peabody Camp and Sarah Camp; Emily Singer (Chad), Tom Vieth, and Irene Vieth; Matthew Camp, Brighton Stockard, Nick Stockard, Alex Camp, Andy Stockard, John Camp, Justin Stockard and Riley Stockard. His great-grandchildren are Charlie Singer and Hank Singer. He was predeceased by his first wife Edith Daintry Fitzhugh Camp, to whom he was married for 55 years, his son William Hoke Camp III, his parents William Hoke Camp and Catherine Thomas Camp and his sisters Mary Thomas Camp Luckett and Nancy Hoke Camp Vail. Mr. Camp attended Louisville public schools and graduated from Louisville MALE High School in 1942. During his school years he was a member of the Castlewood Athletic Club and the Athenaeum Literary Association. He attended Centre College before being called into the Army in April 1943. He served with the 68th Armored Infantry Battalion, 14th Armored Division in France and Germany in 1944 and 1945 where he earned the Combat Infantry Badge and was awarded the Bronze Star. After discharge from the Army, he went to THE University of Virginia, paid for by the G.I. Bill of Rights. At Virginia he was a member of the Delta Kappa Epsilon fraternity and was manager of the basketball team. He was graduated in the class of 1948. Mr. Camp became president of Shippers Supply Company where he worked until his retirement. In 1981, he moved to Cedar Hill Farm in Oldham County and later he and Edith placed the farm in a Preservation and Conservation Easement restricting future development. In 2017, he moved back to Louisville. A graveside service will be held 1 pm Monday March 22, 2021 at Cave Hill Cemetery. Friends and family are asked to gather inside the Broadway gate by 12:45 pm. Memorial gifts may be made to The Pediatric Convalescent Center at the Home of the Innocents, 1100 East Market Street, Louisville, Ky 40206 or Calvary Episcopal Church, 821 South Fourth Street,

William Hoke Camp, Jr., 96, was born on November 19, 1924 in Louisville, KY. He died peacefully on March 19, 2021. He is survived by Katherine Smith Camp, his wife of ten years, and his children Henry Camp (Missy), Laurie Vieth (George), and... View Obituary & Service Information

The family of William Hoke Camp Jr. created this Life Tributes page to make it easy to share your memories.

Send flowers to the Camp family.