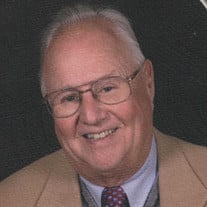 William Fitch Burbank, Jr. died peacefully in his sleep on January 18, 2020 at The Episcopal Church Home. Bill was born in Louisville on February 14, 1927 to parents Lillian Stafford Burbank and William Fitch Burbank, both of whom predeceased him. Bill was gregarious, funny, interesting and loved socializing with friends and extended family. He “never met a stranger” and enjoyed sharing his wealth of knowledge with others. He was the favorite Uncle Bill to nine nieces and nephews and the patriarch of his extended family, dispensing legal, business and personal advice as well as helping out in times of need. He was especially close to his first cousins who, with their mothers, moved into his maternal grandparent’s home on Alta Avenue during the Depression. His mother and one of her sisters later moved their children to houses on Alta Avenue and around the corner. Bill played an active role in his children and grandchildren’s lives, attending sporting events, graduations, and other celebrations. He also extended this support and involvement to his nieces and nephews and their children. He was an excellent swimmer and tennis player with a mean left-handed slice. He enjoyed boating, fishing and skiing in Florida, Canada, and on the Ohio River. He loved music, particularly barbershop quartets, Big Band music and anything he could dance to. His excellent “swing” dance technique made him a popular dance partner. He was an avid reader, particularly interested in history and genealogy. He extensively researched his Western European roots, visiting a number of ancestral sites and was especially excited to discover a Fitch castle and coat of arms in Essex, England. Bill loved Florida’s Gulf Coast where he took his family on annual vacations. In the early 70’s he bought some property on Sanibel Island and began to spend more time there with his mother, sisters, children, cousins and nieces and nephews. Ultimately, Sanibel became his second home where family gathered to celebrate birthdays, reunions, and just spend time together. Bill graduated from Male High School (1944), having served as Vice President of his senior class, Captain of R.O.T.C., and Captain of the Football team, among other positions. In 2011, he was honored to be inducted into the Male Alumni Association Hall of Fame. After high school, he enlisted in the Merchant Marine Academy (1945-46). Upon his return from WWII, he graduated on the Dean’s List from Centre College (1949), majoring in history, economics and English. He received a law degree from University of Louisville in 1952 where he was elected Chairman of the Student Bar Association and President of the UL Student Body. He was very proud of helping create the first Moot Court Trial competition at the law school. He practiced law most of his life and became a successful real estate investor, owning and operating numerous properties and businesses. He was especially proud of establishing the first ambulatory surgery center in Louisville. He participated in many Louisville civic organizations, often in a leadership position, including Louisville Jaycees, Louisville Chamber of Commerce, Exchange Club of St. Matthews Founding President, Juniper Club, Pyramid Investment Club and Kamp Kaintuck. Bill also was actively involved in the installation of the Squire Boone statue in downtown Shelbyville. He was a generous supporter of the local arts, historical societies and human rights organizations. Born and raised in Highland Presbyterian Church, Bill served as an Elder and Deacon there, as well as Sunday School Superintendent, Pastor Search and Property Committee Chairmen, and supported many Youth Group activities. Nancy M. Burbank, his wife and mother of his children, predeceased him. Also predeceasing him were his sister Margaret B. Likins and his wife Virginia C. Burbank. He is survived by his daughter Priscilla A. Burbank (Michael Schewel), Jane E. Burbank and William F. Burbank, III, his grandchildren Laura B. Schewel, Benjamin B. Schewel (Kerilyn), Emily P. Burbank, and his great grandson Elliot D. Schewel. He is also survived by his sister Ruth M. Resch, cousin and close friend Martha M. Dupps, step-daughter Reneaux Collins, and his step-grandsons, Wynter Collins and Taylor Davis Collins. Visitation will be held at Pearson’s, 149 Breckenridge Lane, on January 24 from 4:00 to 7:00 pm. Funeral services will be held on January 25 at 11:00 am at Highland Presbyterian Church, 1011 Cherokee Road, followed by burial at Cave Hill Cemetery. Memorial donations may be made to Highland Presbyterian, Centre College, or the charity of your choice.

The family of William Fitch Burbank Jr created this Life Tributes page to make it easy to share your memories.

Send flowers to the Burbank family.