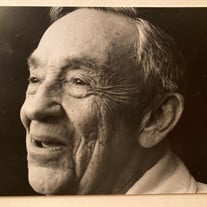 Bill, passed away peacefully on Thursday, December 16, 2021, with family by his side. He adored his wife, was a hardworking family man, a quiet patient man and a great listener. He was born on February 25, 1929, in Merchantville, NJ. The only child of the late Carrie May (Spencer) and William Piatt Williamson. His parents died when he was young, he pushed forward with grit and the support of his close relatives. Somehow, he found his way to Kentucky and was a 1952 graduate of the University of Kentucky (BS in Commerce) and member of Tau Kappa Epsilon (Tekes) fraternity. He enjoyed being an accountant for his entire professional career (he had a pen and pencil in his shirt pocket until the day he died). He is survived by his college sweetheart and wife of 68 years, JoAnn Elizabeth (Hessel) Williamson and together they raised two sons and two daughters. Dr. William Williamson, II (Nancy), Brad Williamson (Beth), Betsy Williamson (Margaret), and Becky Kirkland (Craig). He had eight grandchildren and loved spending time playing games and watching their numerous youth events: James Williamson, Kate Gray (Colin), Jeff Williamson (Lexi James), Ben Williamson (Kelsey), Kevin Williamson (Lindsay), Carrie Serrano (Jorge), Abbey Kirkland, and Elle Williamson Wesley. And, he was just getting to know his three very young great grandchildren Leon and Camille Gray, and Finn Williamson. In addition to his family, he enjoyed visits to the Jersey shore, gardening, his wife’s cooking, UK basketball (particularly when Cawood Ledford called the games), country music and the Grand Ole Opry (preferred Flatt and Scruggs), adding machine tape and a green eye shade, coaching girls softball, traveling to all 120 Kentucky county court houses, trains, and sweets (partial to Nutty Bars). And, for many years he volunteered with Habitat for Humanity, in their accounting department, of course…… Visitation will be Monday, December 20, 2021, from noon to 2 p.m. followed by a short service at Pearson Funeral Home, 149 Breckenridge Lane, Louisville, KY 40207. The family will gather for a private burial at Cave Hill following the service. In lieu of flowers, please consider a donation to Habitat for Humanity, 1620 Bank Street, Louisville, KY 40203 or charity of your choice. Arrangements under the direction of Pearson's, "Where Louisville Goes to Remember".

Bill, passed away peacefully on Thursday, December 16, 2021, with family by his side. He adored his wife, was a hardworking family man, a quiet patient man and a great listener. He was born on February 25, 1929, in Merchantville, NJ. The only... View Obituary & Service Information

The family of William (Bill) Piatt Williamson created this Life Tributes page to make it easy to share your memories.

Send flowers to the Williamson family.