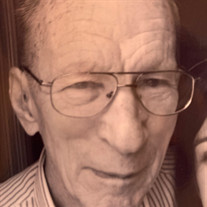 William Alan Wright died at the age of 91 on Thursday September 2,2021. He passed peacefully, after living a full, long life. Bill was born in Owensboro, Kentucky to William Malin and Linnie Leet Wright. The family moved to Valier, Montana and Bill graduated from Valier High School in 1948. He began college at Montana State University and University of Montana, but his studies were put on hold when he was drafted into the Army to honorably serve his country in the Korean Conflict. Bill was a member of the 7th Infantry Division and served in Korea from 1952-54. After his service, he returned to his Kentucky roots to attend Murray State University, from which he graduated in 1956. Bill accepted a job with South Central Bell/Bell South/AT&T after graduation, and remained employed by them until he retired in 1991, after 35 years of service in Birmingham, Alabama & Louisville, Kentucky. After retirement, Bill kept himself busy with many interests and activities. He was an avid model railroader, and leaves behind an impressive model collection. He was actively involved in supporting his children’s sports and activities and was their biggest fan, on and off the field. Bill is survived by his wife of 52 years, Elizabeth Ann Shader (Betty), his children; Paul Thompson, Cynthia (Cindy) Gulley (Jay), William (Alan) Wright Jr. (Heidi), Derek Wright (Heather), and David Wright (Shelly). He is also survived by 13 grandchildren; Ben Thompson (Nikki), Sara Lyons (Dustin), Jonathan Gulley, Madeline, William (Will) Wright III & Mason Wright,Connor & Jacob Stryer, Javen Wright, Savannah, Georgia, Hudson & Genevieve Wright, and one great-grandchild, Eloise Thompson. Bill was an honest and genuine man who was well-loved, and will be sorely missed. His funeral will be held at noon on Saturday September 11, 2021 at Pearson funeral home:149 Breckenridge Lane Louisville, KY. Visitation will be held prior to the funeral from 10:00 a.m. to 12:00 p.m., with a burial at Cave Hill Cemetery to follow. In lieu of flowers, donations can be made in honor of Bill to the Wounded Warrior Project: https://www.woundedwarriorproject.org/donate

William Alan Wright died at the age of 91 on Thursday September 2,2021. He passed peacefully, after living a full, long life. Bill was born in Owensboro, Kentucky to William Malin and Linnie Leet Wright. The family moved to Valier, Montana... View Obituary & Service Information

The family of William A. "Bill" Wright created this Life Tributes page to make it easy to share your memories.

William Alan Wright died at the age of 91 on Thursday September...

Send flowers to the Wright family.