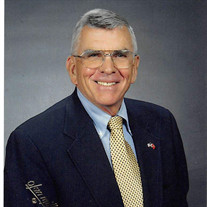 Westray Stewart Cobb passed away peacefully in his sleep on October 15, due to complications of Alzheimer’s. Known as Stewart to his friends and Pop to his family, he was born on June 23, 1934 in Danville, VA to Kenneth and Mildred Cobb, but grew up in Durham, NC. He attended college at the University of Louisville on a Marine Corps ROTC scholarship, earning a BS in Marketing in 1956. It was there that he met the love of his life, Ann Brown Ford, who was his wife for 63 wonderful years. After graduation, Stewart served in the U.S. Marine Corps. Although he never saw direct military action, he was and always will be a Marine. When he completed active service, Stewart and Ann settled back in Louisville, the city that was to be his life-long home. He worked for Shell Oil, then was hired away by Wood Mosaic Corporation, where he was promoted to Sales Manager of the Veneer Division after only 4 years. After 10 years of working for others, Stewart struck out on his own, founding three companies: Cobb Wood Products, which sold hardwood veneers; Lamnitops Incorporated, which manufactured cutting boards using a unique process for which he held 2 US patents; and Midwest Veneers, which manufactured spliced veneer faces for fine furniture. He also led the turnaround of Paramount Plywood, a New Albany-based manufacturer of hardwood plywood. His entrepreneurial talents were formally recognized in 2012, when he was in the first group of businessmen to be inducted into the Entrepreneurship Hall of Fame by the University of Louisville’s College of Business. Stewart was a dedicated supporter of the University of Louisville. He served on the Board of Overseers and the Alumni Board of the Business School, and co-chaired the 1798 Society and Annual Fund. He and his wife endowed the Cobb Family Chair of entrepreneurship at the School of Business, and he delivered the commencement address to the 1993 graduating class. Over the years, he mentored and encouraged many young entrepreneurs. He was also active in many religious, civic, and business organizations. He was an Elder at Highland Presbyterian Church, an active Rotarian, a trustee of the Jefferson County Medical Society’s Medical Foundation, a past president of the Highland-Douglas Neighborhood Association, and a member of both the Fine Hardwoods and Hardwood Plywood Associations. Stewart was a life-long aviation enthusiast and an instrument-rated private pilot who enjoyed nothing more than flying his Gumman Tiger, N623SC. After retiring in 2003, Stewart and Ann spent part of every year in Naples, FL, basking in the warmth he enjoyed so much. He played golf and served on the board of his condominium board. He leaves his wife, Ann Ford Cobb; his sister, Ann Stewart; two sons, Douglas Ford Cobb (Gena) and Steven Stewart Cobb (Jennifer); five grandchildren—Westray (Jackie), Timothy, David, Sarah, and Matthew—one great-grandchild, Salem; and hundreds of lifelong friends. Survived by; Ann Stewart. Stewart was a great man: faithful, generous, honest, industrious, funny, and joyful. He will be deeply missed by all who were privileged to know and love him. Funeral service will be 2 p.m., Saturday, October 19, 2019 at Highland Presbyterian Church, 1011 Cherokee Road. Visitation will be 4-7 p.m., Friday, October 18, 2019 at Pearson’s, 149 Breckenridge Lane. In lieu of flowers, the family would appreciate donations to the Alzheimer’s Association, in the hope that a cure can be found for this terrible disease, or Highland Presbyterian Church.

Westray Stewart Cobb passed away peacefully in his sleep on October 15, due to complications of Alzheimer&#8217;s. Known as Stewart to his friends and Pop to his family, he was born on June 23, 1934 in Danville, VA to Kenneth and Mildred Cobb,... View Obituary & Service Information

The family of Westray Stewart Cobb created this Life Tributes page to make it easy to share your memories.

Westray Stewart Cobb passed away peacefully in his sleep on October...

Send flowers to the Cobb family.