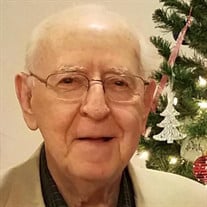 Walter Clarence Sutton, 94, died Saturday, September 11, 2021, following hospitalization from congestive heart failure. Walt graduated from Saint Clairsville High School OH, Muskingum College OH, and did post-graduate studies at Louisville Presbyterian Seminary KY. He had served as US Navy seaman, journalist for United Press, pastor at multiple Presbyterian churches, associate professor of journalism at Elizabethtown Community College and editor with Presbyterian Survey magazine and the John Knox Press publishing house. As a volunteer, he had been active as a foreman with Habitat for Humanity in Louisville KY. At the Forum at Brookside, he had been the regular moderator of a current affairs discussion group and singer with the Brookside Choral group. Walt was born in 1927 in East McKeesport PA, a child of Harold Earle and Zora Harvison Sutton. After high school he served from 1945-1946 (WWII) in the US Navy as a Petty Officer aboard the USS Tappahannock. After college he served as a reporter for United Press, covering governmental affairs in Charleston WV, where he met his future wife, Edith McMillan. They were married in 1956, and after his graduation from Seminary he served as pastor at churches in Eminence KY, Elizabethtown KY and Maysville KY. He was a Sunday School leader and choir member at Harvey Browne Memorial Presbyterian Church KY. He is survived by his son Harold (Mary), and two granddaughters, Katie and Evelyn. He was preceded in death by his parents, his wife Edith McMillan Sutton, his daughter Stephanie Jean Sutton, and his sister Jean Koppert. A memorial service will be held on Sunday, October 3, 2021, at 3pm (EST) in the Sanctuary of Harvey Browne Presbyterian Church, 311 Browns Lane, Louisville KY. Service may be viewed; YouTube: https://www.youtube.com/channel/UCRdqYBeUygIXt6z1TC77aaw Facebook: https://www.facebook.com/hbpres Suggestions for memorial gifts include Presbyterian World Mission, Habitat for Humanity https://louisvillehabitat.org/support-us/donate-now/ Doctors without Borders, or a charity of the giver’s choosing.

The family of Walter Clarence Sutton created this Life Tributes page to make it easy to share your memories.

Send flowers to the Sutton family.