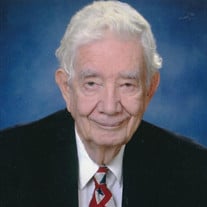 Walter Ramsey Morris, M.D., 93, of Louisville, Kentucky, passed away peacefully on August 2, 2019, with his family by his side. He was born in Dawson Springs, Kentucky to Anne Loreen Ramsey and Walter Amon Morris. During his childhood, he was featured in the Courier-Journal as a cartoon caricature after witnesses observed him riding his bicycle down the street carrying a beehive in the basket with bees swirling about his head. After high school, Walter served in the Army in California. He returned to Kentucky and earned his Bachelor of Science from Western Kentucky University, his master’s in bacteriology from the University of Kentucky, and then graduated medical school from the University of Louisville. He enjoyed several years practicing medicine as a general practitioner in Breckenridge County before pursuing additional training in ophthalmology at the University of Pennsylvania. He practiced ophthalmology in Louisville for nearly 30 years. Always a pioneer, he was the first doctor in Louisville to fit contact lenses and the first to employ lasers to repair retinal detachments. He retired in 1993. After retirement, he created a successful national mail order model airplane business, Morris Hobbies. Walter lived a vibrant life. Known for his thrill seeking hobbies, he was an accomplished (and fearless) private pilot, water-skied with his 5 year old son riding on his shoulders, and rode motorcycles well into his 70s. Some of his tamer hobbies included beekeeping, ham radio, and bird keeping. For decades, he was accompanied by his sidekick, a white miniature poodle, always named Jake. Believing the world needed more life of all kinds, he would find homes for the kittens he seemed always to have on hand by offering them to shoppers at Kroger and by placing them as “treats” in children’s bags at Halloween. His passion for living and optimistic spirit will be dearly missed by all who knew him. Walter was a person of deep and abiding faith, a member of Broadway Baptist Church for more than 50 years, served as a deacon and was a driving force behind the construction of its Family Life Center. He is preceded in death by his wife, Virginia Joiner, and his daughter, Mary Drewery. He is survived by three of his children: Walter R. Morris, Jr. (Jessica), Gail Morris, and Margaret A. Conrad (Tim); his 10 grandchildren: Elizabeth Ross (Justin), Ann Cordray (Morgan), Brent Drewery, Sarah Loiacano (Andrew), Allison Drewery, Joe Conrad (Cassie), Laurie Wilbanks (Jordan), Julie Sawyer (Colin), David Conrad, and Ginny Conrad.; and great-granddaughter, Caroline Loiacano. The family will receive friends on Thursday, August 8 from 5 to 8 PM at Pearson’s, 149 Breckenridge Lane. Graveside service will be held on Friday, August 9 at 11 AM at Cave Hill Cemetery. Friends may gather at the Broadway entrance at 10:50 AM. In lieu of flowers, contributions are suggested to Broadway Baptist Church and the Alzheimer’s Association.

Walter Ramsey Morris, M.D., 93, of Louisville, Kentucky, passed away peacefully on August 2, 2019, with his family by his side. He was born in Dawson Springs, Kentucky to Anne Loreen Ramsey and Walter Amon Morris. During his childhood, he... View Obituary & Service Information

The family of Walter Ramsey Morris M.D. created this Life Tributes page to make it easy to share your memories.

Send flowers to the Morris family.