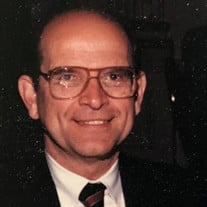 W. David Klingman, 83, adored Dad, Opa, Father-in-law, Uncle, Friend, Attorney and Musician passed away Friday, February 28th, 2020. Dad was listening to Billie Holiday as he passed after a long battle with dementia. He is predeceased in death by the love of his life, his wife of 52 years, Anne Stites Klingman, parents Gene and Sarah King Klingman, brother Gene Klingman, first cousin Thelma Klingman Espeseth and his best jazz buddy Phil Bailey. He is survived by children Coleman Willis (Hanneloes Pen) of Amsterdam, Holland, Stephen Willis, Tasha (Morry) Owen and Amy (Charlie) Marcum, all of Louisville, Kentucky. Dad is also survived by grandchildren, Jesse, Daniel and Chaja Willis of Amsterdam, Holland, Henry and Spencer Willis, Morry and Anna Owen and Esther, Bonnie, Justice, Worthy, Adeline, Royal, Vivian, Race, Armor, Fisher, Noble and Grant Marcum all of Louisville, Kentucky. Dad is also survived by Dan and Donna Klingman of Louisville, Kentucky, Daniel (Megan) Klingman of New Albany, IN, Alicia Klingman of Louisville, Kentucky, and Vincent King of Louisville, Kentucky. Dad graduated from Highlands High School in Fort Thomas, Kentucky, and received his undergraduate degree from the University of Cincinnati. He served in the United States Air Force as an Officer and graduated from the University of Louisville School of Law. Dad practiced law for his father-in-law, Col. Henry J. Stites, III at Stites & Stites law firm, then with law firms Frockt & Klingman; Klingman Matheis & Weinstein and lastly, in private practice with Joel Frockt and Irv Maze. Dad loved practicing law until age 76 and was passionate about helping people. Dad will be remembered as a protective and devoted husband, father and grandfather. He was a man of truth, wisdom and great honor. He was immensely loved and will be missed by his family, friends and colleagues. The family would like to thank the Jeff Sherman Trio and Varanese Restaurant for Dad’s Monday night jazz sessions, Ray Johnson for their Jack Fry’s jazz sessions and his long friendship, Chris Fitzgerald for their jazz sessions in his studio (Sparrow and the Bear CD) and Vickie Williams with Home Instead for making Dad laugh everyday she was with him. Playing his clarinet was like air to Dad. Visitation will be Sunday, March 8th from 1 to 5pm at Pearsons, 149 Breckenridge Ln., Louisville, KY 40207. Funeral service will be at 11am on Monday, March 9th at St. Marks Episcopal Church with visitation in the parlor from 10am until time of service. In lieu of flowers, please consider a contribution in Dad’s name to one of the following: Kentucky Opera, 323 W. Broadway, Suite 601, Louisville, KY 40202 or WFPK (Jazz), 619 S. 4th St., Louisville, KY 40202.

The family of W. David Klingman created this Life Tributes page to make it easy to share your memories.

Send flowers to the Klingman family.