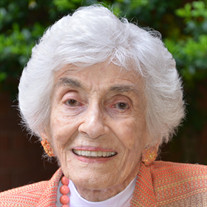 Virginia Tripp Keeney, M.D., died on May 29, 2019, after a brief illness. She was 99 years old and lived a remarkable life as a physician, educator and civic leader. She was much loved by her children and grandchildren. She was born on March 23, 1920, in Albany, New York, to Leon and Mabel Tripp. Leon’s Albany Boat Works built mahogany speed boats, cruisers and yachts until the Great Depression. Virginia and her parents enjoyed many summers on Lake Champlain on their yacht, the Virbel. Virginia graduated from the Milne School in Albany, then from the College of William and Mary in 1942. Early in her freshman year, she met Arthur Hail Keeney at a bonfire, and they always said neither of them dated anyone else after that night. They married in 1942, with the world at war around them. Virginia completed her first year of medical school at University of Louisville, where she was one of four women in her class of 100. But her ambitions were suspended in 1946 when the Army sent Arthur, who had just received his M.D., to Korea as a member of the U.S. occupying forces. Virginia went along. Both worked at the Army hospital in Pusan, and in their time off volunteered at a leper colony run by a Presbyterian missionary. After Arthur’s tour of duty was over, they traveled in Asia for two months, which ignited Virginia’s lifelong interest in Asian art. Virginia continued her medical studies in Philadelphia, where Arthur was finishing his residency and doctorate, but completed medical school at the University of Louisville. As a physician and educator, Virginia held many roles at the University of Louisville School of Medicine, including Associate Professor in the Department of Family and Community Medicine, Assistant Professor in the Department of Psychiatry and Behavioral Sciences, and Associate Director of the Bingham Child Guidance Center. She was a pioneer in the field of medical ethics; she developed ethics courses at the Temple University and University of Louisville schools of medicine and served as ethics advisor to many organizations. She received the Citizen Laureate of Louisville award for her service in 1962 as the Kentucky co-coordinator of the first-ever national polio vaccination drive, Sabin Oral Sunday. Her love of medicine was so great that she didn’t fully retire until age 86, and since then she has rarely missed Monday morning coffee with other retired physicians who call themselves the Medical Mafia. Virginia served on many boards and commissions over the course of her life. She was a lifetime board member of the Louisville Orchestra, the American Printing House for the Blind and the American Red Cross. She was the first woman appointed to the Kentucky Board of Medical Licensure. She was a member of Second Presbyterian Church and the River Valley Club. She loved the arts – she served as a docent at the Philadelphia Museum of Art, always had season tickets to the Louisville Orchestra, and belonged to a serious literary book club for more than 50 years. She and Arthur had a large circle of colleagues and friends they entertained frequently in their home. They travelled extensively – often at the invitation of international medical groups. Virginia leaves behind three children, Steven Harris Keeney (Lorri), Lee Douglas Keeney (Jill) and Dr. Martha Heyburn (John, deceased), and five grandchildren, Christian Keeney (Dawn), Lee Douglas Keeney Jr., Alexander Keeney, William Heyburn (Ally) and John (Jack) Heyburn. Arthur died in 1996. Virginia was fortunate to have a second marriage, to Harrison Houston II, who also predeceased her. She enjoyed her years with Harry’s children and grandchildren, including Holly Knauert of Milford, Conn., Edward Houston of Craftsbury Common, Vt., and Harrison Houston III of Sandwich, Mass. In recent years, she cherished the friendships she made as a resident of Treyton Oaks Towers, where she was a member of the Stretch Your Mind Society and a constant presence known and loved as “Dr. Elegant.” Visitation will be from 3 to 7 p.m. on Friday, May 31 at Second Presbyterian Church, 3701 Old Brownsboro Road. The funeral also will be at Second Presbyterian on Saturday, June 1, at 10 a.m., with burial at Cave Hill and reception to follow. In lieu of flowers, please consider giving a gift in her memory to the Louisville Orchestra or American Red Cross. The family wants to thank Hosparus and the nurses on 4 West of Norton Women and Children’s Hospital for their skilled and heartfelt care.

Virginia Tripp Keeney, M.D., died on May 29, 2019, after a brief illness. She was 99 years old and lived a remarkable life as a physician, educator and civic leader. She was much loved by her children and grandchildren. She was born on March... View Obituary & Service Information

The family of Virginia Tripp Keeney MD created this Life Tributes page to make it easy to share your memories.

Send flowers to the Keeney family.