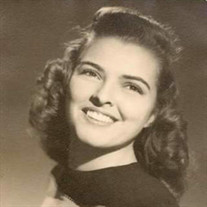 Virginia Pett Lemon Wilson Doherty Virginia Pett passed away peacefully at the home of her daughter on January 20, 2020 after living a remarkable 98 years, five months, and eight days. She often tried to reassure her loved ones as the end drew near that ,“If I died tomorrow, I’ve had a GREAT life and no regrets”. She was born on September 12, 1921 in Roanoke, Virginia and moved along with her family soon thereafter to Pikeville, Kentucky; the place that would become her home and her heart. There she lived with her husband Dr. Charles Fredrick Wilson, and together they would raise their four children, Sharon Pett Wilson (John) Proctor, now of Louisville Ky; Charles F. (Wanda) Wilson Jr. now of Lake Suzy, Fl; Kim Burch (Lynn) Wilson now of Louisville, Ky; and Steve Miles (Rosemary)Wilson now of Richmond, Ky. She would suffer Charles’s death from illness; and, lived to find love again with Paul Doherty. Pett shared her life with both gentleman in travels around the world, residences in Del Ray Beach, FL. and Pikeville until illness and eventual death stole her second love from her life. Pett, as she was known to her friends and family, was an accomplished and diverse woman whose interests and talents spanned the world. She firmly believed that, "Life was not a journey to the grave with the intention of arriving safely in a pretty and well-preserved body, but race where one needed to skid in broadside, thoroughly used up, totally worn out, and loudly proclaiming: Wow - what a ride!" Her interests and accomplishments in life were remarkable and many. She played the piano for her church, was a Girl Scout Troop Leader, a swim instructor, a life long member of the Daughters of the American Revolution, a licensed optical technician, an entrepreneur in the optical industry, a Certified Medical Technician, a licensed pilot, a construction manager, business manager, and a championship amateur golfer . She collected art, followed the stock markets, met the politicians who shaped her world from those in Pikeville to the highest halls of Washington, including Mrs. Barbara Bush. Of her many accomplishments, she was most proud of her efforts to both develop and bring statewide mental health services to all and especially eastern Kentucky. This was a cause that she would champion for the majority of her adult life. She also was an active political advocate for her beliefs and tried to instill a sense of pride, a questioning nature and the desire for her children and extended family to never take their freedoms for granted. Her travels took her to every continent on the planet including Antartica. She facilitated opportunities for children and grandchildren to instill this wandering and curious nature about the world beyond their immediate sphere of reality. She spent many years assisting her first husband in their philanthropic efforts to bring medical care to the people of Haiti via the medical teams of FOCUS, out of Chicago and supported by Doctors Without Borders. To say she was amazing is an understatement, to say she was and is loved is a proclamation that her quiet nature would dismiss but is none the less, the truth. But to say that she was a singularly determined woman, who knew her own mind, believed with her whole heart that she commanded her own destiny and with a quiet will, determination, sweet smile, and cool wit, she led a family from the time of buckboards and steamboats servicing the coal fields of eastern Kentucky to space travel as the mode of our future is a surety that all who knew and loved her can surely attest with both love, laughter, and admiration. In addition to her children listed above, she is survived by her eight grandchildren, John (Traci) Proctor IV, Jeff Proctor, Matt (Elizabeth) Proctor, Tommy (Erin) Wilson, Katie (Thomas) Miller, Jennifer (Timothy) Connolly, Christopher (Karina) Wilson , Adam (Vivian) Wilson-Hwang. Additionally, she is survived by seven great grandchildren. Services will be private. In lieu of flowers, the family requests that donations be made to Hosparus.

Virginia Pett Lemon Wilson Doherty Virginia Pett passed away peacefully at the home of her daughter on January 20, 2020 after living a remarkable 98 years, five months, and eight days. She often tried to reassure her loved ones as the end drew... View Obituary & Service Information

The family of Virginia Pett Lemon Wilson Doherty created this Life Tributes page to make it easy to share your memories.

Send flowers to the Doherty family.