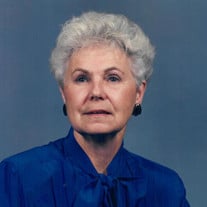 Louisville—Virginia Roselyn Crawford, 93, died peacefully on March 29, 2022. Virginia was born on December 1, 1928, in Cloquet, Minnesota, to Julia Ann Oakland and Thorn Wilhelm Hansen. She is survived by her children, Robert MacKenzie Crawford, and Elizabeth Anne Crawford, both of Louisville, and by nieces and nephews. After graduating high school, she attended business college and became a secretary at Minnesota Power and Light in Duluth. There, she worked in the internal investor relations department when the company went public on the New York Stock Exchange in 1950. She met her husband of 55 years, John Chisholm Crawford, while in Duluth, and they later moved to Louisville after they married in 1952. For many years, Virginia volunteered as a reader for the blind and worked as the secretary to the President of the Kentucky Chapter of the National Federation of the Blind, in addition to working closely with writer Helen Parker on her book, “Light on a Dark Trail.” She was involved with both of her children in their scouting activities and was their biggest fan in all of their endeavors. For many years, Virginia was active with TWIGS, Norton’s Kosair Children’s Hospital charitable organization. She was a member of the Women’s Homemakers Group and enjoyed bowling, golfing, and Bridge. An avid gardener, her vegetables frequently won Best in Show ribbons at the Kentucky State Fair. Virginia enjoyed decorating her home and her creative flair was evident in the beautiful handwork that graced her house. Some of these were also award winners at the Kentucky State Fair. In her later years, she developed a fondness for quilting and was a member of 2 quilting groups. One of her most beautiful creations was the quilt she made for her daughter Elizabeth’s bed. Virginia loved animals and made sure to feed her backyard birds and deer every day. She was preceded in death by her parents, her brother Robert Lee Hansen, and his wife Jody, of Colorado Springs, CO, her sister Nancy Edwards of Cloquet, MN, and her husband. In lieu of flowers, the family requests that donations be made in Virginia’s name to the Kentucky Humane Society, Our Savior Lutheran Church School, or St. Jude’s Children’s Research Hospital. A memorial service will take place Monday, April 4 at 12 PM at Pearson’s Funeral Home, 149 Breckenridge Lane, Louisville, KY 40207. Visitation will be from 10-12, with interment at Cave Hill Cemetery.

The family of Virginia R. Crawford created this Life Tributes page to make it easy to share your memories.

Send flowers to the Crawford family.