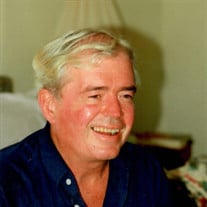 Thomas Lewis Tichenor, 90, passed away peacefully with his family at his side on March 17, 2022, after a long battle with Alzheimer’s. Tom was born on August 25, 1931, one of four boys born to Tom and Mary Tichenor. Tom graduated from Male High School class of 1950 and then graduated from the Number One University in the world, Indiana University in 1954. There was no bigger IU fan on the planet other than Tom and his loving brothers, Jack, Bobby and Raymond. Tom enjoyed nothing more than spending football weekends on Lake Monroe, subjecting his many U of K friends to a true football experience! The stories told of the friendly rivalries are infamous. Tom was a second Lieutenant in the Air Force. Tom returned to Louisville with his former wife, Anita Van de Voort Tichenor. Together they had five children whom Tom raised. Tom had a successful career in the Insurance industry and then as a Senior VP/Executive Compensation Consultant at Meidinger and Associates where many successful years were spent working with his best friends. Tom and Kitty Edelen English married in 1980, blending their two families becoming "Eight is Enough". Their home was filled with life and love and an ever-growing family. Tom found real joy in giving Santa a run for his money. Christmas made him shine and filled his heart with the love of family and friends. He leaves behind an awe-inspiring collection of ornaments. He was a founding member of Hunting Creek Country Club where he had the uncanny ability to play golf either right or left handed, a member of the Louisville Boat Club and St. Francis in the Fields. Tom is predeceased by his parents, Thomas Lewis and Mary Elizabeth Tichenor and brothers Jack and Raymond Tichenor. He is survived by his wife of 41 years Kitty Edelen Tichenor and his loving children, Julia, Robin, Tommy, Todd and Catherine (Tich) his brother, Bobby Tichenor and his grandchildren Pierce Tichenor and Mary McWilliams, step children, Sam English (Dena), Elizabeth Anderson (Sid) and Barnett English (Lynne) step grandchildren, Mary Charles Collett, Rebecca Beaulieu, Eliza Anderson, Carrie Anderson, Hannah Rahill, Katherine English, Lola English and his loving nieces and nephews. Tom was larger than life to his many friends. He was a loving husband, father and Bop and he will forever be in our hearts. His funeral service will be held on Tuesday, March 29 at 11:30 AM at St. Francis in the Fields Episcopal Church, 6710 Wolf Pen Branch Road at US Hwy 42. Visitation will follow with family and friends at the church. The family request that donations be made in Tom’s honor to Alzheimer’s Association or Hosparus Health of Louisville. Arrangements under the direction of Pearson’s, "Where Louisville Goes To Remember".

Thomas Lewis Tichenor, 90, passed away peacefully with his family at his side on March 17, 2022, after a long battle with Alzheimer&#8217;s. Tom was born on August 25, 1931, one of four boys born to Tom and Mary Tichenor. Tom graduated from... View Obituary & Service Information

The family of Thomas Lewis Tichenor created this Life Tributes page to make it easy to share your memories.

Thomas Lewis Tichenor, 90, passed away peacefully with his family...

Send flowers to the Tichenor family.