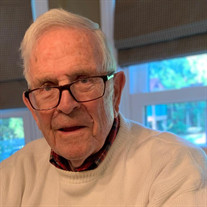 Thomas Appel Salsbury (Tom) of Louisville, KY, passed away peacefully on March 22, 2022. Tom, son of Emily Kimmel Appel and Joseph Morrison Salsbury, was born on November 1, 1934, in Pittsburgh, PA. He attended Shady Side Academy and Mercersburg Academy and went on to graduate from Washington & Lee University in Lexington, VA. Following college, Tom enlisted in the United States Navy, where he served as a gunnery officer aboard the USS Columbus stationed in the South Pacific. His service began following his marriage to his wife of 64 years, Eleanor Taylor Salsbury (Ellie) in 1957 and the cross-country honeymoon trip from Jamestown, NY, to Long Beach, CA, where he met his ship. In 1958, Tom was rushed home to be with his wife for the birth of their first child, Tom, Jr. Upon completion of his service, he returned to the East Coast to raise a family and begin a long career in the field of human resources. Beginning in Shelton, CT, and Kingston, NY, the family grew with the birth of second son, Stuart. Life then took the young family to Westernport, MD, and a position with Westvaco Pulp and Paper Mill. It was during this time that the family welcomed their third son, Dwight. The growing family then moved to Skaneateles, NY, where they settled down from 1974-88 with Tom taking HR positions with Columbian Rope Company and later Crouse-Hinds Company and Welch-Allyn. After a series of positions in New England, Tom and Ellie finally settled down to retirement in Louisville to be closer to family. A lifelong Presbyterian with a particular love of music, Tom sang in the choir of every church he attended along his life’s journey. Giving of his whole self to his faith, Tom was an active church member including serving as an Elder, Deacon, and on many committees. Likewise, Tom was an active longtime member of Rotary Club International, outwardly serving the communities where he lived. An avid golfer, Tom and his four-some would consistently secure their early morning weekend tee-times. Finally, a longtime Pittsburgh Steeler fan, Tom has left a legacy of 3 generations of Steeler fans who feel his presence during every game. Although a man of quiet voice, he was blessed with a gracious heart as wide as the Pacific Ocean, where he once served. Tom was a curious soul who was gifted with the ability to meet people in their space. All who knew Tom and his sweet smile were welcomed by his authenticity. As Maya Angelou once stated, “when someone shows you who they are, believe them” – that was Tom. He is survived by his wife of 64 years, Eleanor, and his three sons: Tom, Jr. (Allison) of Christchurch, UK, Stuart of Media, PA, and Dwight (Melanie) of Louisville, KY, along with 5 loving grandchildren – Tommy, Emma, Meghan, Owen, and Lila, who all have fond memories of Gramps’ clue hunt games. Tom will be interred at Cave Hill Cemetery during a private graveside service. In lieu of flowers, donations may be made in Tom’s memory to: Second Presbyterian Church in Louisville, or The Michael J. Fox Foundation for Parkinson’s Research Arrangements under the direction of Pearson's, "Where Louisville Goes To Remember".

The family of Thomas Appel Salsbury created this Life Tributes page to make it easy to share your memories.

Send flowers to the Salsbury family.