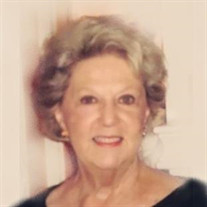 Theresa Ann "Terry" Kuhn Arnett, 85 years old, passed away on July 12, 2019. She was born February 8, 1934 in Louisville, KY to Mary Ella and Martin Kuhn. She is preceded in death by her parents, her husband of 64 years, Dr. Hal Arnett and two brothers, Martin L Kuhn and Dr. Forrest Kuhn, Sr. Terry attended Presentation Academy and the University of Louisville where she was a member of Chi Omega sorority and the Chapter Advisor for many years. It was at U of L that Terry also met the Love of her Life on a blind date. He was a dental student at U of L and she was a mere freshman, but 6 months after they met they entered into a marriage that lasted until Hal's passing in 2017. While Hal's military service took them and their daughter, Karen, away from Louisville for three years; they came home richer for the experience, with new friends and a baby boy, Marty. Happily back in Louisville, Terry's life revolved around her family. She was involved with PTA, Girl Scouts, Boy Scouts, Indian Guides, and sports teams. She helped Hal establish his dental practice, became a member of The Younger Woman's Club (the year she co-chaired the "Camelot" themed Charity Ball and suffered whiplash injuries from wearing the 15-pound cone shaped hat for hours was legendary!) Because she was married to a former U of L football player, Terry was a huge U of L fan! She and her good friend, Jackie Stokely used to feed 100's tailgating out of the Arnett motorhome at home and away games. Just recently, Terry disclosed the name of the culprit who was stealing dozens of chocolate chip cookies at each game. She was such a hospitable, southern lady that she would not even think of confronting the cookie thief. When Karen was 12 and Marty was 10 ,Terry and Hal had another son, Bryan. They were older parents now but determined to do everything with Bryan that they had done with the older two children. It kept them young so that when their first grandchild was born 13 years after Bryan, they were ready to be active, fun grandparents. It was then that Terry and Hal became "Honey" and "Big Daddy." Best Grandparents Ever! Terry enjoyed playing tennis in her younger years, boating, traveling the world with friends and family, fearlessly flying in a private plane piloted by her husband (once!) and being with friends at the Louisville Boat Club, The Naples Sailing and Yacht Club, and Kentucky Colonels in Naples. With great humor, kindness, and a realistic view of the twists and turns of life, Terry added the job of full time caregiver for her mother when the children were still young. She and Hal moved her mother into their home and cared for her there for 7 years until she needed professional care in a nursing facility. With the children on their own, the older generation gone, Terry agreed to another "Hal-brained" idea. They moved to Naples, Florida, opened a dental practice and stayed over 20 years until health issues made it necessary to move back to be close to family. The Naples years were so much fun for the kids, grandkids, nieces, nephews, and extended family. Terry, who was not initially enthusiastic about moving to Naples, said, "You know, it's hard to be sad here. The sun is shining, the birds are singing- you just want to get out and enjoy the day." May the rest of your days be sunny Honey. For the last two years you have been ready to be with the Love of Your Life. Give Big Daddy a hug for all of us! Terry is survived by her children Karen (Roger Hale), Marty (Angela), Bryan (Jennifer), granddaughters: Misty Staffopoulos (Mike), Virginia Hale, Ali Lewellen (Beck), Alyssa (Kevin), Ashley and Shelby Arnett. Great-granddaughter, Christina Staffopoulos, nephew, Dr. Forrest Kuhn Jr. (Mary Julia), and great-nephew and nieces Forrest, Elizabeth, and her wonderful, loving caregiver, Sarah Long Kuhn. Visitation will be on Wednesday, July 17, from 5-8 pm at Pearson's, 149 Breckenridge Lane. There will be a private graveside service on Thursday, July 18. In lieu of flowers, expressions of sympathy may be made to Gilda's Club of Kentuckiana, 2440 Grinstead Dr. Louisville, KY 40204.

Theresa Ann "Terry" Kuhn Arnett, 85 years old, passed away on July 12, 2019. She was born February 8, 1934 in Louisville, KY to Mary Ella and Martin Kuhn. She is preceded in death by her parents, her husband of 64 years, Dr. Hal Arnett and two... View Obituary & Service Information

The family of Theresa Ann "Terry" Kuhn Arnett created this Life Tributes page to make it easy to share your memories.

Send flowers to the Arnett family.