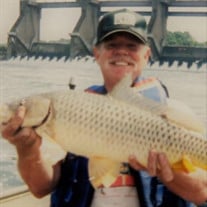 Theodore O’Hara Samuels III, 73, died Wednesday, April 27, at Hosparus Health Inpatient Care Center. Born February 5, 1949, the son of Theodore O’Hara Samuels Jr. and Helen Craig Samuels, brother to Harriette Tarquinio and Helen O Hasken, who preceded him in death. Ted is survived by his daughter, Kitty Samuels; son-in-law, Matthew Trzaskus; two beloved grandchildren, Alexis and Theodore Trzaskus; brother-in-law, Ron Tarquinio; nephews, and their family, Ken (Dawn) and Ted (Christine) Tarquinio. Even before he graduated from DuPont Manual in 1967, Ted was always outdoors. He loved running, golf, gardening, and fishing. Iroquois Park held a special place for him as he often spent time there with his father. When Ted wasn’t outside, he was mixing it up on the Figure 8 racetrack in his car, the x88. He blended his passion for cars with his entrepreneurial spirit by founding Samuels Collision Repair in 1983. After retirement, Ted didn’t slow down. He immersed himself in writing poetry, making beaten biscuits, horse racing, and watching mixed martial arts fights. Please come celebrate Ted’s life with Pimento Cheese and Benedictine sandwiches, music, and stories. Visitation is Tuesday May 3rd from 4:00-7:00pm at Pearson’s 149 Breckenridge Lane. Funeral service will be at noon Wednesday, May, 4, at Pearson’s with burial at Cave Hill Cemetery to follow. The family has requested that remembrances be made to Olmsted Parks Conservancy, Feathers Galore Parrot Rescue, or GRRAND Dog Rescue.

The family of Theodore O'Hara Samuels III created this Life Tributes page to make it easy to share your memories.

Send flowers to the Samuels family.