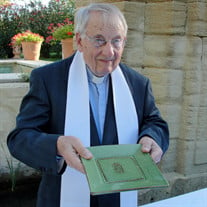 The Reverend Willis Donald Brown (Don), 90, passed away on May 12, 2021, at the Episcopal Church Home. Don was born in Fort Worth, Texas on October 7, 1930, to Claire and Willis Brown. He graduated from Texas Tech University with a Bachelor of Science degree in Business and was a member of the Phi Gamma Delta Fraternity. After college graduation, he joined the Air Force. He was sent to the Defense Language Institute in Monterrey, California to learn the Russian language. He was stationed to a listening post in Japan. Following this assignment, he joined the U.S. Bureau of the Census in Washington, D.C. One of his proudest achievements was leading the effort to restore the National Congressional Cemetery. During this time, he decided to follow his life long dream of becoming an Episcopal priest by attending the Virginia Theological Seminary. After completing his study, he moved to Louisville, Kentucky to become a Deacon in the Episcopal Diocese of Louisville. He was later ordained and became the rector at the former St. John Episcopal Church. After retiring from the ministry, Don worked for several years as a speaker for the charity, Food for the Poor. In his spare time, Don attended a writing class in which he discovered a hidden talent for writing short stories. His stories about his childhood and life experiences were often filled with humor and thoughtful observations of a by-gone era. Don is survived by his wife, the former Patricia Knadler; step-children Deborah McCoy and her husband, Robert Keenan and Thomas B. McCoy; step-grandchildren, Brian and Brent McCoy; sister Jackie Kunke (pre-deceased); nephews Paul Rider and Steve Rider and their families; niece Cathy Berg and her children; and cousin Anna Mae. Memorial service will be held at 10 a.m. on Saturday, June 5, 2021, at St. Matthews Episcopal Church, 330 North Hubbard’s Lane. Visitation will be from 4-7 p.m. on Friday at Pearson’s, 149 Breckenridge Lane. Service can be viewed via live stream at; https://www.facebook.com/stmattky/ or https://www.youtube.com/channel/UC8lyhjDbEpnrKstN5MsG8Yg Memorial gifts may go to St. Matthews Episcopal Church, Episcopal Church Home, or the Humane Society of Louisville.

The Reverend Willis Donald Brown (Don), 90, passed away on May 12, 2021, at the Episcopal Church Home. Don was born in Fort Worth, Texas on October 7, 1930, to Claire and Willis Brown. He graduated from Texas Tech University with a Bachelor... View Obituary & Service Information

The family of The Reverend Willis Donald Brown created this Life Tributes page to make it easy to share your memories.

The Reverend Willis Donald Brown (Don), 90, passed away on May...

Send flowers to the Brown family.