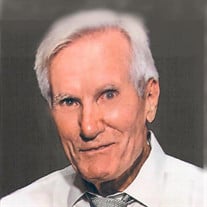 Talmage Wayne Brown, 91, passed away peacefully on October 19, 2020. He was born on May 26, 1929 the son of Allie Lee Brown, Sr. and Flo M. Brown in Shelby, OH. Talmage joined the US Army in 1948 serving during the Korean War in Panama. He was a Golden Gloves Boxing champ while in the Army. He joined the US Army Reserve in 1953 and retired as a Major in 1974. Talmage graduated from UK in 1956 in Accounting and earned his MBA in 1968 from UofL. He was a retired Certified Public Accountant and was employed with Ernst & Ernst, a partner with Compton, Kottke & Brown, Partner in Potter and Co. He was a member of Watkins Memorial United Methodist Church since 1961 where he held many positions. Past Director of Norton's Healthcare Foundation. He is preceded in death by his parents, Allie Lee Brown, Sr. and Flo M. Brown; siblings, June Snyder, Ralph Brown and Elwood Brown. Talmage leaves to cherish his memory his loving wife, Yvonne H. Brown of 66 years; children, Timothy W. Brown (Pamela), Sharon B. Lane (Danny), Marcie B. Prather; Brother, Alle Lee Brown, Jr.; Grandchildren, Talmage C. Brown (Sawsan), Matthew B. Lane (Elizabeth), Katherine B. Cochran (Phillip), Patrick A. Lane (Ashley), Elliot W. Lane (Kelsey), and Travis B. Prather; Ten Great-Grandchildren; Funeral service will be 11 a.m. Thursday, Oct. 22 at Pearson’s, 149 Breckenridge Lane with burial to follow at Cave Hill Cemetery. Visitation will be 4–7 p.m. Wednesday. Expression of Sympathy can be made to, Watkins Memorial United Methodist Church, 9800 Westport Rd. Louisville, KY 40241.

The family of Talmage Wayne Brown created this Life Tributes page to make it easy to share your memories.

Send flowers to the Brown family.