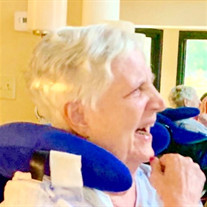 Suzanne (“Suzi”) Ballard Rogers passed away on Sunday, August 18, 2019 at 76 years old. Born on December 26, 1942 in Corpus Christi, Texas, Suzi was the oldest of two children and the only daughter of Gustave Breaux Ballard, Jr. and Ann Perdue Ballard. She resided the majority of her life in Louisville, Kentucky, though she attended and graduated from Foxcroft School in Middleburg, Virginia and subsequently attended Bradford Junior College and the University of Colorado. Upon returning to Louisville, she married the love of her life, John F. Rogers, Sr., on August 9, 1963. A homemaker and mother during the majority of her adult life, Suzi is predeceased by John, her parents, and her only sibling, Gustave Breaux Ballard, III. She is survived by two sons, John F. Rogers, Jr. (Amy) of Franklin, Tennessee, and Breaux Ballard Rogers (Paige) of Louisville, along with three loving grandchildren, Lara Rogers, Sophia Rogers and Woodford Rogers. Suzi also departs leaving behind a surviving brother-in-law, two surviving sisters-in-law and numerous cousins, nieces and nephews. Having been diagnosed with Multiple Sclerosis in her 20’s, Suzi further relied over the last fifty-plus years on the assistance of many loving and committed caregivers who each selflessly gave of their time, energy and efforts to help the family in attending to her daily needs, and to each of you the family says “thank you so very much”! Despite the impact that Multiple Sclerosis had on her, an impact that would vault many into despair, Suzi instead maintained and projected an incredibly positive attitude and smiles each day. It is this ever-present recollection of her that will be most remembered during her visitation to be held on Sunday, August 25, 2019 between 2:00 p.m. and 5:00 p.m. at Pearson’s Funeral Home, 149 Breckinridge Lane, and during a celebration of life mass at 10:00 a.m. on Monday, August 26, 2019 at Holy Trinity Catholic Church, 501 Cherrywood Road. A private family burial will follow at Cave Hill Cemetery. Memorial gifts may be made to the National Multiple Sclerosis Society or an organization of your choice.

The family of Suzanne "Suzi" Ballard Rogers created this Life Tributes page to make it easy to share your memories.

Send flowers to the Rogers family.