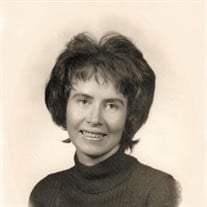 The visitation and service has been CANCELLED and will be rescheduled at a later date. Ida Maney "Sissy" Thompson Nash of Prospect, Kentucky, died at home surrounded by family on March 10, 2020 of complications arising from a pulmonary disease. She was born on December 10, 1928, in Louisville, the daughter of Col. Frank Barton Thompson and Ida Maney Webb Thompson. She is preceded in death by her husband, Robert McLean Nash, her parents, her sister, Margaret Becker, and her two younger brothers, Frank and James "Buddy" Thompson. She was an Episcopalian and a member of Calvary Episcopal Church. Sissy graduated from Louisville Collegiate School and Hollins College, and shortly thereafter married fellow Louisvillian Bobby Nash. Sissy and Bobby shared a lifelong, loving relationship that spanned the next 56 years, building a magnificent garden and farm that was the joy of their lives. They were fortunate to share this with their three children, four grandchildren, and six great- grandchildren. Sissy was always an active volunteer and advocate for many public and private causes. Over the course of her life, she served on many boards including the Louisville Ballet, St. Francis High School, and the Speed Museum. Sissy was fiercely patriotic, fair minded and appreciative of all the gifts and opportunities she was given, and she felt strongly that it was the duty of all citizens to support and to improve the place in which they lived. At a time when downtown Louisville was experiencing significant urban decline, Sissy spearheaded several important preservation projects as well as fundraising events for these projects to demonstrate the usefulness and uniqueness of neglected and abandoned historic buildings in downtown Louisville. For example, in 1974, as a member of the Junior League of Louisville, she was asked to find a new headquarters and to lead its fundraising, restoration and decoration of the new building. By selecting an abandoned warehouse at 627 West Main Street, it was Sissy's intention to bring revitalization and preservation interest back to Downtown. For her exceptional work with this building called Stairways, Sissy received the League's Founders Fund Award and national recognition. Her work with the Broadway Project and her collaborative adaptive reuse project of 600 W. Main into a premier office building are further examples of her desire to bring people and interest out of the suburbs and back into the city. Sissy felt that in order for the city to be a desirable place to live, it needed strong creative and performing arts. Sissy's gift was fundraising and she put her boundless energy and style toward organizing many galas and events including the first Speed Ball, first Bourbon Ball, and first Ballet Ball. However, it was Sissy's love of gardening, inherited from her mother and grandfather, that really set a high bar horticulturally in Louisville. The same hard work and commitment she brought to bear in her civic undertakings contributed to her creation of what is considered one of the most important gardens in the region. Longfield has been featured in several books and countless articles in many publications including the New York Times. On their beautiful farm, Sissy and Bobby were gracious, welcoming hosts to friends, family and children of all ages. Sissy's beauty, joie de vivre, style, incredible work ethic, high standards, fierce loyalty to family and friends, and vast array of interests made her an admired and beloved woman. She truly believed the quote she kept on her desk, written by JFK: "Every person can make a difference, and every person should try." She is survived by her three daughters: Margaret Nash (Martin Violette), Louise Gardner (Michael), and Kathy Cary (Will); four grandchildren, Julie Evans (Matt), Charlie Farnsley (Mindy), Lilly Cary, and Will Cary; and six great granddaughters. A memorial service will be held at 4:00 p.m. on Monday, March 16th at Calvary Episcopal Church, 821 S. Fourth Street with private burial in Cave Hill. Visitation will be from 2:00 — 4:00 p.m. on Sunday, March 15th at Pearson's, 149 Breckenridge Lane. Live streaming may take place; please see update in Saturday's Courier Journal Obituary page. edition. In lieu of flowers, expressions of sympathy can be made to Filson Historical Society, Cabbage Patch Settlement House, and Hosparus Health of Louisville. The Memorial Service will be recorded for those who may not be able to attend. For additional information visit. idamaneynash.com

The visitation and service has been CANCELLED and will be rescheduled at a later date. Ida Maney "Sissy" Thompson Nash of Prospect, Kentucky, died at home surrounded by family on March 10, 2020 of complications arising from a pulmonary... View Obituary & Service Information

The family of "Sissy" Ida Maney Nash created this Life Tributes page to make it easy to share your memories.

The visitation and service has been CANCELLED and will be rescheduled...

Send flowers to the Nash family.