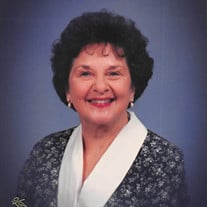 Shirley Ann Whonsetler passed into Eternal Life on Wednesday, February 16, in Louisville KY. Survivors include her two children, Scott Philip Whonsetler (Patti) and Lisa Ann Whonsetler Fox (Steve); four grandchildren, Stephanie, Danny (Victoria) and Kristi Whonsetler and Courtney Fox along with 2 great grandchildren Addie Whonsetler and Lincoln Trimm. She is pre-deceased by her parents Marjorie Gaver Hines and Edward Philip Hines and husband Reverend Richard G Whonsetler. Shirley was born in Springfield Ohio where she graduated from Roosevelt Jr High School and Springfield South High School. She continued her education and in 1955 graduated with a Bachelor of Science Degree in Education from Wittenberg College. While attending Wittenberg, she was a member of Alpha Xi Delta Sorority, cheerleading captain and directed/acted in numerous drama productions. At Wittenberg, she and her husband Richard met and were married in 1956. While Richard went on to pursue his Bachelor of Divinity Degree from Hamma Divinity School in Springfield, Shirley taught Jr High and High School in the Springfield City school system. In 1958, after Richard was ordained as a Lutheran Minister, they moved to Wilmington Ohio to serve Faith Lutheran Church. During their tenure at Faith Lutheran, Shirley continued to teach, and they welcomed their first child, Scott Philip Whonsetler. In 1960, she and Richard accepted a call to serve Trinity Lutheran Church in Dayton Ohio. While in Dayton she continued to teach school and welcomed their second child, Lisa Ann Whonsetler Fox. In 1967, Shirley and Richard accepted a call to St. John Lutheran Church in Louisville, KY where she and Richard worked alongside each other for 24 years serving and building the membership of St John Lutheran until Richard's retirement in 1991. Shirley began her teaching career at Ballard High School in Louisville in 1973. She taught various subjects including Jr High and High School English, Humanities and was the school's Instructional Coordinator. After obtaining her certification, Shirley taught in the field of Special Education at Ballard until her retirement in 1998. Shirley attended Spaulding University and obtained her Master of Arts Degree in Education in 1976 and went on to obtain her Professional Certificate for School Administration and Supervision, Endorsement for Secondary School Principal (grades 7-12) and Certification to teach Exceptional Children with Learning and Behavior Disorders (grades 7-12) During her years in teaching, Shirley also co-founded one of Jefferson Counties first ACT/SAT Prep Classes and served her client's children for over 15 years. In 1990, she and husband Richard opened one of Louisville's first Pet Sitting businesses known as Pet Love Pet Sitters. Their business served the Louisville and Oldham County communities for 20 years. After her husband's death in 2010, Shirley's passion for taking care of animals continued and she worked diligently to continue to serve her clients until the business closed in 2013. Shirley worked with various local organizations to spay and neuter stray cats and worked tirelessly to ensure that all stray animals were fed and given shelter. It was her hope and dream that all of God's creatures felt safe, needed and loved. In retirement, Shirley enjoyed the care and comradery of the staff and residents of Belmont Village in Louisville. She was a longtime member of Baptist Milestone Wellness Center and developed valued friendships while attending their swimming classes. Shirley touched all who knew her in her many roles as Minister's Wife, Teacher, Entrepreneur, Pet Sitter and Animal Advocate. She fulfilled each role with a smile, positive outlook, warmth and determination. Shirley's greatest joy in life was being a wife, mother and grandmother. She brought to her family the gift of grace, laughter, hope, encouragement, faith and most of all unconditional love. A legacy which her family considers one of God's richest blessings and will live in their hearts and lives forever. Funeral Service will be held 6 p.m., Thursday, February 24 at St. John Lutheran Church, 901 Breckenridge Lane with burial to follow at Ferncliff Cemetery, Springfield Ohio. Visitation on Thursday, 5-6 p.m. prior to service. Memorial gifts may be given to the Ky Humane Society. Arrangements under the direction of Pearson's, "Where Louisville Goes To Remember".

The family of Shirley Ann Whonsetler created this Life Tributes page to make it easy to share your memories.

Send flowers to the Whonsetler family.