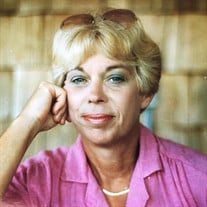 Sherrill Gordon Williams, aged 83, died peacefully on January 10, 2020 at the Episcopal Church Home, Louisville, KY, after a courageous battle with dementia. Sherrill was born December 21, 1936, in Louisville, KY, the daughter of Sherrill Thirlwell and Nebby Gordon. Sherrill attended Eastern High School in Louisville and graduated in 1954. She was a varsity cheerleader and proudly served on reunion committees with a devotion to keeping in touch with classmates. Family was Sherrill’s passion and delight. She loved to host and entertain at her house, surrounded by loved ones. Sherrill was a gifted pianist, and always was able to light up a room with beautiful and lively music. She endeared those around her with her wonderfully funny sense of humor, beautiful smile, and loving ways. Her kindness to others was never ending, and her talents abounded. In addition to raising four children, Sherrill worked with children of special needs both at Roberta Tully School and Churchill Park. From there, she was a fundamental innovator of the Disabled Citizens Computer Center, known as enTech today. She also enjoyed all of the many times she and her husband, Jim, traveled to Hilton Head Island, SC, as well as other destinations. Often, Sherrill and Jim were spotted cruising along the Ohio River enjoying their boat and friends they met along the riverside. Sherrill is survived by her loving husband, Jim Williams; her sister, Marilyn McCarthy-Brunnhoeffer and her husband, Jim Brunnhoeffer; her two daughters, Debbie (Jeff) Durling and Tracy (Rod) McClanahan; her two sons, Richard (Lynne) Dukes and Kevin (Christy) Williams; her granddaughters, Megan McClanahan and Grace Dukes; her grandson, Carson Dukes; two nephews, Brian McCarthy and Darin McCarthy; and a number of other relatives and close friends. The family wishes to thank all of those who cared for her during her last illness, including Dr. Jane Cornett and all of the exceptional staff members at the Episcopal Church Home. Funeral service will be 12 Noon on Tuesday, January 14, 2020, at Pearson's, 149 Breckenridge Lane. Visitation will be from 4-7 p.m. on Monday. Burial will be private. In lieu of flowers, memorial donations can be sent in her name to Alzheimer’s Association, 6100 Dutchman’s Lane, #401 Louisville, KY 40205. . —–

The family of Sherrill Gordon Williams created this Life Tributes page to make it easy to share your memories.

Send flowers to the Williams family.