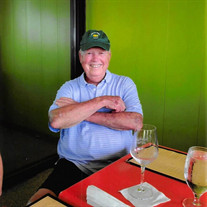 Samuel “Wheeler” Rudd, age 88, passed away on January 1, 2021 at Norton Brownsboro Hospital while comforted by his four children. Wheeler was born in Portsmouth, Ohio to the late Samuel Wheeler Rudd Sr. and Carrie Coats Rudd. The family moved to Louisville, KY where Wheeler attended Holy Spirit, Manual High School and graduated from Xavier University. Most of Wheeler’s career was with WAVE-TV as General Sales Manager. He was promoted to VP/GM for Cosmos Broadcasting in Toledo. Upon retiring he was approached by Cosmos to become President of CableVantage. This allowed him to move back to Louisville. He was very involved in the beginning years of the Kentucky Derby Festival and helped organize the first Balloon Race. Wheeler was a member of Hurstbourne and Audubon Country Clubs. Wheeler lived life to the fullest until his final days. He loved working in his yard. For the past 20 years, he spent time going to his favorite place, Pawley’s Island, SC, where he loved to play golf. He also enjoyed horse racing, sailing, and dinners out with his family. Wheeler is survived by his four children; Cindy Kelly, Scott Rudd, Pam Rudd, Amy Smith and grandchildren; Brenna Gray, Christopher Kelly, Cameron Rudd, and Michael Kelly. Wheeler was blessed to know his great grandchildren, Kylie Rudd and Logan Kelly. Wheeler is also survived by his significant other of over 20 years, Jane Shontz, his sister, Susan McCloskey and brother, Charlie Rudd. He was preceded in death by sister, Jane Ann Durban-Lyle. Visitation will be 2-4 p.m. on Saturday, January 9, 2021 at Pearson’s,149 Breckenridge Lane. A private service will be at 4 p.m. Saturday, January 9, 2021. In lieu of flowers, charitable donations can be made to St. Jude Children’s Research Hospital. The family would like to extend a special Thank You to the team at Norton Brownsboro Hospital for taking such excellent care of their father. Their compassion for Wheeler’s children during this difficult time will forever be appreciated.

The family of Samuel "Wheeler" Rudd created this Life Tributes page to make it easy to share your memories.

Send flowers to the Rudd family.