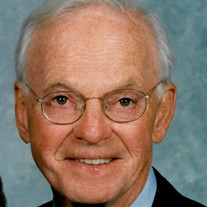 Samuel Gordon Miller passed away on Sunday, July 28, 2019. Sam was born in Louisville, Kentucky on August 31, 1925 to John Gordon and Lucy Lee Miller. Sam graduated from the Taft School in Watertown, Connecticut He then attended Trinity College in Hartford, Connecticut before transferring to Yale University in New Haven, Connecticut. On May 23, 1943 he enlisted in the Navy's V-12 program. Upon graduating from Yale University, he served as an Ensign onboard a Naval Weather Ship in the Bering Sea and was honorably discharged from the Navy on October 23, 1945. He then attended Harvard Business School in Boston, Massachusetts and graduated in 1949. On September 9, 1947 he married the love of his life, Jean Dumesnil at St. Mark’s Episcopal Church in Louisville, Kentucky. His business career began at the Miller Paper Company, followed by real estate developments; Holiday Inn's, Holiday Manor, Arby's Restaurant franchises, and the Plainview Master Planned Development. Sam was a supporter of the Louisville community where he served on the Regional Airport Authority of Louisville and Jefferson County in the 1980's. He served as a Board Member of the Hilliard Lyons Government Fund from1987 to 2006. As a co­ founder of Hospice of Louisville he served as Hospice Board President from 1983 to 1985, Board Member from 1981to 1987, and as the Hospice Treasurer from 1989 to 1991. Sam was an avid and skilled pilot and enjoyed scuba diving, but his true passion was golf. He loved playing golf around the world. He was a member of the Louisville Country Club, Grandfather Golf and Country Club, Elk River Club, and Johns Island Club. He also enjoyed spending time with family and friends at the River Valley Club, The Pendennis Club and the Dennbarr Club. He was also a devoted parishioner of St Francis in the Fields Episcopal Church and an ardent supporter of the St Francis in the Fields Episcopal School. Sam is preceded by his father John Gordon Miller and his mother, Lucy Lee Payne, as well his stepfather Harold Payne and his sister Lucy Lee Jones. He is survived by his wife Jean Dumesnil Miller of Louisville, Kentucky; his children, Rowland Dumesnil Miller and Samuel Gordon Miller, Jr both of Louisville, Kentucky, and his daughter, Hope Miller Goins and husband Kenneth Milton Goins, Jr of Atlanta, Georgia. Sam has five grandchildren; Rowland Antoine Dumesnil Miller, New York, New York, Benjamin Worth Bingham Miller and Eleanor Hannah Miller both of Louisville, Kentucky, Lucy Goins Blough and her Husband Logan Craig Blough of Charlotte, North Carolina, and Kenneth Milton Goins III of Atlanta, Georgia. A Memorial service will be held at St Francis in the Fields Episcopal Church, 6710 Wolf Pen Branch Rd, Friday, August 2, 2019 at 2 PM with a reception to follow. Private burial at Cave Hill Cemetery. In lieu of flowers, the family requests that donations can be made to St Francis in the Fields Episcopal Church, Harrods Creek, Kentucky.

The family of Samuel Gordon Miller created this Life Tributes page to make it easy to share your memories.