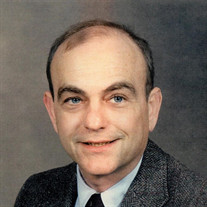 Samuel Norman McKenna, 81, entered eternal life on Tuesday, March 31st. Norman was born March 11, 1939 in Louisville. His parents were Samuel Joseph McKenna and Sibyl Elizabeth Newton. He had one sister, Elizabeth Frances McKenna, who was born and died in 1944. Educated at Portland School and Shawnee High School (class of 1956), Norman received his B.A. with honors in English from the University of Louisville in 1960 and his M.A. from the same university in 1963. In 1960 Norman was awarded Kentucky's first English-Speaking Union scholarship to study at a British University. He attended Oxford University's International Graduate Summer School. Since Norman studied at Oxford, hundreds of Kentucky college students have studied in Britain on the same program. Norman earned his teaching certificate at U of L in 1965. At U of L he was president of the Woodcock Society and Kappa Delta Pi and was a member of Phi Delta Kappa. He served in the United States Coast Guard Reserve and was the outstanding Unit Member in Louisville's ORTUPS (o) 02-82130 (Port Security) Unit in 1967. Teaching English, Humanities, History, and Journalism, Norman was a faculty member at several high schools: Male, Iroquois, Waggener and Ballard. At Iroquois he received the Kentucky Star Teacher Award in 1969. In both 1982 and 1984 he was named Outstanding Teacher at Waggener, where he was High-Q Team coach for four years. He worked two years in the Central Office as teacher/writer in JCPS's Department of Public Information, editing Monday Memo, the weekly newsletter for employees. He also taught at the University of Louisville and Christian Academy of Louisville. Throughout his career Norman wrote curriculum for the school system. Active in community and church service, Norman was president of the English-Speaking Union ( Kentucky Branch ) and of Friends of the Louisville Free Public Library. He was on the board of the Louisville Bach Society. As a churchman he was a vestry member and secretary, Eucharistic minister, usher, church school teacher, and newsletter writer. Norman's interests included the arts, book collecting, reading, bicycling, walking, and all things British. He was a member of St. Mark's Episcopal Church and the English-Speaking Union. Survivors include several cousins as well as caring friends and good neighbors. A dog lover, Norman was blessed with Jeeves, a Black Lab, and Gizmo, a Beagle. Due to the current Covid pandemic, a private graveside service will be held at Cave Hill Cemetery. Pearson's, 149 Breckenridge Lane, has been entrusted with arrangements.

The family of Samuel Norman McKenna created this Life Tributes page to make it easy to share your memories.

Send flowers to the McKenna family.