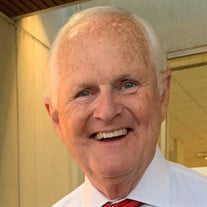 Samuel George Hayward Samuel George Hayward, 76, of Louisville, passed away with his family by his side on Sunday, February 27, 2022. Sam was born to the late Fredrick Reynolds and Lucy Eleanor Pratt Hayward of Fairlee, VT. He cherished his Vermont childhood. He was predeceased by his brothers Fredrick Hayward (Jane) and Gary Hayward. His is survived by his bride of 52 years, Barbara Baumann Hayward, son, Samuel “Chip” Hayward, Jr. (Suzy), daughter, Elizabeth Hayward-Jansen (Jude), grandchildren: Samuel G. Hayward III, Dalton Hayward, Lucy Hayward-Jansen, and Elliott “Ellie” Hayward-Jansen, as well as his brother, Neil Hayward (Vicki), sister-in-law, Anne Greenwell (Jerry), brothers-in-law, Donald Baumann (Diana), David Baumann (Rochelle), George Baumann (Martha), and a host of nieces, nephews, and cousins. Sam ends “a really great life” with adoring extended family and countless friends who will miss him dearly. Sam graduated from Worcester Academy and was a 1968 alumnus of Norwich University military academy (Northfield, VT) where he made life-long friends. He attended the Brandeis School of Law at the University of Louisville where he met the love of his life, Barbara. Hours after their wedding Sam was called to active duty. He served his country during the Vietnam War where he was stationed in Korea. Sam returned to complete law school and enjoyed a fulfilling career in employment law. He was beyond proud when his son joined his practice in 2013. Sam loved all aspects of sports. He was a natural athlete and even received an offer to play major league baseball. He had an enduring passion for coaching soccer at all levels. His players joked that he would introduce himself first as a soccer coach then later as an attorney. He coached and refereed soccer at multiple levels including recreational, competitive, high school, and was a college referee. He was inducted into the Kentucky Soccer Hall of Fame in 2019. Sam was particularly proud to have been the coach of the first girl’s high school soccer team in Jefferson Co. He was proud of his former players and cheered them on long after they hung-up their cleats. Sam never met a stranger. He was incredibly warm with an infectious personality and a smile that lit up the room. Everyone felt welcome around him. He was a captivating storyteller and loved a good joke. He was larger than life to his grandchildren whom he adored and of whom he was so proud. He could make anything fun. Sam loved attending sporting events of all kinds and was an active supporter of U of L athletics. He also loved watching NASCAR and attending street rod conventions. He truly loved life and made the most of every moment he was given. Visitation will be held on Thursday, March 3, 2022 from 5:00-7:00 pm at Pearson’s Funeral Home (149 Breckenridge Ln, Louisville, KY 40207). The funeral mass will be held at 10:00 am Friday, March 4, 2022, Holy Trinity Catholic Church (501 Cherrywood Rd, Louisville, KY 40207). Burial will be at Calvary Cemetery for family and close friends following the funeral mass. In lieu of flowers, memorial contributions may be made is Sam’s name to Norwich University (Northfield, VT), University of Louisville, St. Xavier High School. "Where Louisville goes to remember"

Samuel George Hayward Samuel George Hayward, 76, of Louisville, passed away with his family by his side on Sunday, February 27, 2022. Sam was born to the late Fredrick Reynolds and Lucy Eleanor Pratt Hayward of Fairlee, VT. He cherished his... View Obituary & Service Information

The family of Samuel George Hayward created this Life Tributes page to make it easy to share your memories.

Send flowers to the Hayward family.