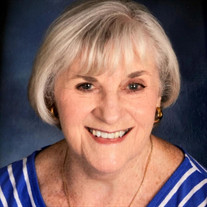 Ruthann Beth Gessner Stemler passed away peacefully on February 3rd at The Legacy at English Station in Louisville, KY. She was born September 3, 1939 to Anna Ruth (Ray) and William R. Gessner in Dayton, Ohio. The family moved from Dayton to Clarksville Indiana in 1945 and Ruthann graduated from Jeffersonville High School in 1957, where she had been active in choir and other clubs including Job’s Daughters. Ruthann married her high school sweetheart, Bill Stemler, a Captain in the Louisville Fire Department and owner of Stemler’s Grounds Maintenance, in 1957. Ruthann was an avid piano player, enjoyed traveling with her friends and family, and spending time with her granddaughters. After teaching pre-school for a time, she went on to become assistant to the Dean of the University of Louisville School of Medicine and while there earned her Bachelor of Arts from the University of Louisville in 1998. She was a very active, long-time member of St. John Lutheran Church where she also served as Associate in Ministry and as Director of Adult Ministries from 1996 until her retirement in 2007. Ruthann volunteered weekly at the St. Matthews Area Ministries food pantry for many years during her retirement. Ruthann was preceded in death by her husband of 48 years, William L. Stemler, Sr, her parents, her brothers, Robert Gessner of Dayton, Lawrence Ralph "Gus” Gessner and Gus’s wife Mary “Inky” of Jeffersonville IN, her sister, Marilyn Smitherman and Marilyn’s husband Robert of Winston-Salem NC. She is survived by her son, William L. Stemler Jr, and his wife Alison, of Shelbyville KY, granddaughters, Hannah and Hallie Stemler, her sister, Janet Nolan of Clarksville IN, and many loving nieces and nephews in KY, IN, OH, NC, SC, GA and FL. A memorial service will be held at St. John Lutheran Church, 901 Breckenridge Lane, at 11am on Wednesday February 9th and can be viewed online using the link on stjohnlutheranky.org. Visitation will be at Pearson’s Funeral Home on 149 Breckenridge Lane from 4pm to 7pm on Tuesday February 8th. Expressions of sympathy can be made to St John Lutheran Church, St Matthews Area Ministries, or the Alzheimer’s Association. Arrangements under the direction of Pearson's, "Where Louisville Goes To Remember."

Ruthann Beth Gessner Stemler passed away peacefully on February 3rd at The Legacy at English Station in Louisville, KY. She was born September 3, 1939 to Anna Ruth (Ray) and William R. Gessner in Dayton, Ohio. The family moved from Dayton... View Obituary & Service Information

The family of Ruthann Beth Gessner Stemler created this Life Tributes page to make it easy to share your memories.

Send flowers to the Stemler family.