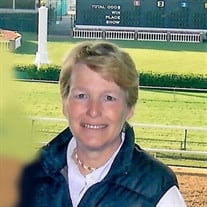 Robin Cooper Covitt On June 11, 2021, Robin Cooper Covitt of Ballardsville, Kentucky passed away at the Episcopal Church Home in Louisville, Kentucky. She was born on December 15,1946 and raised in Prospect, Kentucky. Her life long love of horses originated from her paternal grandmother, Eva Lee Cooper. Robin competed in fox hunts, steeplechases, and worked as an exercise rider for thoroughbreds at Churchill Downs. This love of horses lasted for the rest of her life, as she and her husband, Michael raised horses on their farm in Ballardsville, Kentucky. Robin was preceded in death by her husband Michael H. Covitt, DVM, her parents, William F. and Barbara C. Cooper, and niece, Jenna Marie Cooper. She is survived by her brothers William F. (Rebel) Cooper, Jr. and Roderick H. Cooper (Barb), nephew William F. (Billy) Cooper III (Nicole) and their children Kenna and Collins, niece Elizabeth Cooper Spears (George) their children Cooper and George, and her dear friend Barbara Rosenman. Robin’s family most appreciates the care and friendship of Kim Dunn and her family, the caregivers, nurses, and everyone at the Episcopal Church Home. Special thanks for the loving and compassionate care of Dr. Jane Cornett, Melanie Drury, APRN and Kelly Smith, APRN. They were not only Robin’s medical team, but also her advocates and support for her and her family. Robin will be buried beside her husband Michael in a private graveside ceremony in the Cooper family cemetery in Prospect, Kentucky. Should you consider a contribution to be made in Robin’s name, please direct it to The Humane Society of Oldham County at P.O. Box 727, LaGrange, Kentucky 40031. Pearson’s Funeral Home of Louisville is in charge of arrangements. Condolences may be expressed at www.pearsonfuneralhome.com/obituaries

The family of Robin Cooper Covitt created this Life Tributes page to make it easy to share your memories.

Send flowers to the Covitt family.