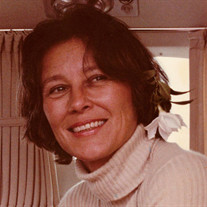 Robin Morehead Carrier, 91, died peacefully at her home on March 7, 2022. Robin was born on September 17, 1930 in Louisville, Kentucky to the late Robert M. Carrier and Caroline McAlpine. Growing up in both Louisville and Cincinnati, she made her debut at Louisville Country Club, where she was often remembered as the “Belle of the Ball”. She attended Rhode Island School of Design. In the 50s, Robin married artist W. Terrell Dickey of Louisville, with whom she had two children. In the 60s, she married Alex Howard of Cincinnati, and had one child. She was a devoted mother to her three children. An artist at heart, Robin was also an architect in the Jeffersonian amateur tradition, building houses mainly for herself. Her most notable design was her home, Indigo Plantation, which serves today as the Clubhouse at Oldfield in Okatie, South Carolina. She was passionate about gardening, and every house she created had much attention put into the landscape design. She loved to cultivate rare and exotic plants. Robin was an adventurous world traveler who wasn’t afraid to get off the beaten track, going places like Tibet, Pakistan, the Galapagos Islands and Dubai, as well as numerous other destinations, often with her cousin Gray Henry. Robin was also an avid hunter and fisherwoman. Longtime, dear friend, Mimi Cay, described Robin as “a unique combination of intelligence, charm and charisma, and adventure. Not a dull moment with her.” Robin was predeceased by her older sister, Caroline von Stade, of Cincinnati. She is survived by her half-sister Betsy Hyslop (Jim) of Louisville; her three children, Nöel Dickey Atherton, W.Terrell Dickey (April) and Rob Howard (Jen); four grandchildren, Marsh Atherton (Desiree), Gray Alexander (Keri), Hart Howard, Darby Howard; three great grandchildren; and numerous nieces and nephews. The family is grateful for her wonderful caregivers Monica, Kim and Julye, whose love and support allowed Robin to remain comfortable in her home to the end. Visitation will be on Friday March 11, 2022, from 4:00 to 6:00 PM at Pearson’s 149 Breckenridge Lane. Anyone wishing to say a few words will be welcome to do so from 5:30 to 6:00 PM. In lieu of flowers, expressions of sympathy may be made in Robin’s name to The Alzheimer’s Association or to any favorite charity of the donor. Arrangements under the direction of Pearson 's, "Where Louisville Goes To Remember".

Robin Morehead Carrier, 91, died peacefully at her home on March 7, 2022. Robin was born on September 17, 1930 in Louisville, Kentucky to the late Robert M. Carrier and Caroline McAlpine. Growing up in both Louisville and... View Obituary & Service Information

The family of Robin Morehead Carrier created this Life Tributes page to make it easy to share your memories.

Robin Morehead Carrier, 91, died peacefully at her home on March...

Send flowers to the Carrier family.