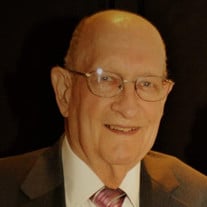 Robert Theodore “Ted” Trautwein (89) of Louisville, died at home on February 28, 2021, surrounded by his family. He was born on January 4, 1932 in Louisville, Kentucky to Edward Theodore and Katherine Schneiter Trautwein. Ted was preceded in death by his parents, his brother Jim and his infant daughter, Martha Gayle. He is survived by his wife of 62 years, Gayle Clark Trautwein, his daughters, Lisa (Tom) Young, Elaine Trautwein, Andrea Trautwein (Andrew Hartmans); grandchildren Lily and Phoebe Priel, Greg (Serenity) and Noah Hughes, Elise Duerr, and Ross, Caroline and Tessa Hartmans; and brother and sister-in-law Richard and Doris Trautwein along with three great grandchildren and many cousins, nieces and nephews. Ted served in the US Navy in active duty on the aircraft carrier the USS Intrepid, then served 24 years in the Naval Reserves and retired with the rank of Captain. He graduated from Speed School of Engineering in 1955 and completed a graduate degree at the University of Kentucky. He loved his work as a civil and structural engineer so much that he never retired. He was a dedicated member and elder at Crescent Hill Presbyterian Church for almost 60 years, and for over 40 of these years, he served as Treasurer or Assistant Treasurer. Ted loved sports. He was a University of Louisville L Club member and an ardent Cardinal fan. Visitation will be at 11 am on Friday, March 5, at Pearson’s, 149 Breckenridge Ln., with a Celebration of Life to follow at 2 pm. We ask that you wear a mask and maintain social distancing guidelines. Private burial will be held at a later date. Expressions of sympathy may be made to the memorial fund at Crescent Hill Presbyterian Church, 142 Crescent Ave., Louisville, KY 40206.

Robert Theodore &#8220;Ted&#8221; Trautwein (89) of Louisville, died at home on February 28, 2021, surrounded by his family. He was born on January 4, 1932 in Louisville, Kentucky to Edward Theodore and Katherine Schneiter Trautwein. Ted was... View Obituary & Service Information

The family of Robert Theodore "Ted" Trautwein created this Life Tributes page to make it easy to share your memories.

Send flowers to the Trautwein family.