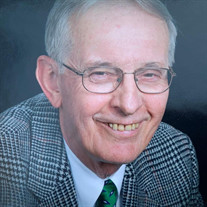 Robert Lee Steineker, 84, of Louisville KY passed away on Saturday, November 6, 2021, at The Robley Rex Department of Veterans Affairs Medical Center in Louisville, Kentucky. He leaves behind his beloved wife of 54 years Lynne, son, Lee Steineker, daughter-in-law, Melissa, grandchildren, Katherine Elizabeth, Nathan Michael, and Joshua Oliver, son David Steineker, daughter-in-law Allison, grandchildren Madelyn Hall, Mason James, Micah William, and Melody Carol. He is also survived by his sister-in-law Elizabeth Steineker, niece Caroline Steineker Powell, nephew, Martin Steineker, and their spouses and children. He was preceded in death by his parents, Carl and Marguerite Steineker and brother, Carl Denhard “Denny” Steineker. Bob was born and raised in Louisville and graduated from Atherton High School, where he played football and basketball, and University of Kentucky where he was a member of Phi Delta Theta. Bob served in the U.S. Army for several years and was employed at Prescotech for many years. Bob and Lynne were married at Beargrass Christian Church on March 18, 1967, and they continued to be active members there throughout their marriage and are members of the Friendship Sunday School class. Bob enjoyed gardening, playing golf, do-it-yourself home projects, spending time with his friends, vacationing in Venice, Florida, and cheering on his UK Wildcats. He and Lynne have been members of several lunch and dinner groups and are avid supporters of Kosair Charities. Above all else, Bob enjoyed spending time with his family and was so proud of his grandchildren. He spent many hours supporting his grandchildren in their various academic and sports endeavors. Visitation will be on Thursday, November 11th from 4:00-7:00 PM at Pearson Funeral Home, 149 Breckenridge Lane. His funeral services will also be held at Pearson Funeral Home on Friday November 12th at 11:00 AM with private burial to follow at Cave Hill Cemetery. Memorial contributions can be made to Kosair Charities or Beargrass Christian Church.

The family of Robert Lee Steineker created this Life Tributes page to make it easy to share your memories.

Robert Lee Steineker, 84, of Louisville KY passed away on Saturday,...

Send flowers to the Steineker family.