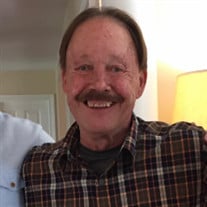 Robert Alexander “Bob” Nolan, Jr., age 72, of Prospect, KY died peacefully on January 28, 2021 with family by his side. A native of Louisville, he was the son of the late Robert A. Nolan, Sr. and Jeanne Barker Nolan. He was a graduate of Aquinas High School where he excelled in tennis, achieving second in the state. Following his graduation from the University of Kentucky’s School of Architecture, he spent his entire career working for the family architecture and engineering business, Nolan & Nolan. Bob was preceded in death by his parents, his wife, Patti Miles Nolan, and his sister, Mary Jeanne Nolan. He is survived by his son, Alex Nolan (Joanna), his daughter, Abbe Dunaway (Allan), his sisters, Kathy Stuedle (Rich), Susan McNeill (Michael), and brother, Jimmy Nolan. He is also survived by his three granddaughters, Isla, Maisie and Finley Nolan, and grandson, Nolan Dunaway. Bob’s heart was one of the biggest for people and animals. Patti was his lifelong love, spending only a handful of nights apart in their twenty-six year marriage. His children and his grandchildren were his great pride, and he was recognized as an employee advocate during his tenure as Vice President at Nolan & Nolan. Bob and Patti cared for over twenty animals during their marriage, and Bob continued to support animal welfare after her passing. His humor will also be missed, as he was the king of short anecdotes for any person he happened upon. In light of Covid, a Celebration of Life will be held at a later date. In lieu of flowers, the family requests donations be made to the Kentucky Humane Society 1000 Lyndon Lane Suite B, Louisville, KY 40222.

The family of Robert Alexander "Bob" Nolan, Jr. created this Life Tributes page to make it easy to share your memories.

Send flowers to the Nolan, family.