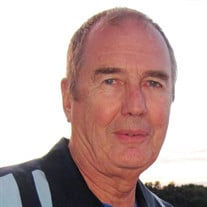 Robert “Bob” Earl Miller, age 85, of Prospect died at home on May 31, 2020. A Louisville native, Bob graduated from DuPont Manual High School in 1954 and later attended Ahrens Trade School and the U of L Speed School. A Tool and Die maker by trade, early in his career he worked as a process engineer at Ford Truck Plant. Bob married Jo Ann (Morgan) in 1960 and their family grew in the next decade. Diana was born and Denise came along five years later. Bob started Blue Grass Electronics Inc.,1976 in LaGrange and the company, relying on Bob’s patents, became a global leader in glass-break technology. As the CEO he managed and design production facilities in two countries with sales worldwide. Bob and Jo Ann were partners in the business. After his retirement Bob and Jo Ann enjoyed the Cayman Islands where he swam two-miles daily in the sea. He came to swimming late in life at age 60 and won many awards with The Masters Swimmers including a 1996 National Championship in the 1500m. Bob was a generous and loving father and grandfather. He was 6'8" and was larger than life at times – but there was always a gentle smile and a helping hand to be offered. With his tools and scientific mind, he could design, build or fix most anything. Bob was an Original American Success Story who built a company, a life, and a family from scratch. Son. Husband. Father. Grandfather. Friend. Bob is survived by the love of his life and wife of 59 years plus, Jo Ann, his daughters, Diana (John) Fowler and Denise (Shannon) Ragland. Six grandchildren: Elizabeth, Garnet, Wyatt and Troy Fowler and Sydney and Reese Ragland. He was preceded in death by his parents, Gladys W. and E. Raymond Miller. He was a member of the North Oldham Lions Club and was instrumental in acquiring and developing the club’s property. He was a Master Mason of Fortitude Lodge No. 47 LaGrange. Bob also served for eight years as a Magistrate in Oldham County. Bob spent 28 days in the military in 1957. He received a honorable discharge because of his height. The Family would like to thank the many physicians and medical staff who cared for Bob. Due to COVID-19, the funeral service will be private with a celebration of life to be announced. Expressions of sympathy made be directed to the American Cancer Society.

Robert &#8220;Bob&#8221; Earl Miller, age 85, of Prospect died at home on May 31, 2020. A Louisville native, Bob graduated from DuPont Manual High School in 1954 and later attended Ahrens Trade School and the U of L Speed School. A Tool and... View Obituary & Service Information

The family of Robert "Bob" Earl Miller created this Life Tributes page to make it easy to share your memories.