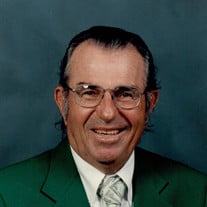 Robert Walter Byrd of Prospect, Kentucky passed away peacefully Monday June 1, 2020 at Kindred Hospital in Louisville, Kentucky. He was born on November 6, 1935 in Crossroads, Missouri to Pearl and Walter Byrd. He was a graduate of Farmington High School and the University Of Missouri School Of Business. Courtesy of Uncle Sam, he served in the Army in France, bought a Vespa motor scooter and traveled in Europe. In 1961 he married Carole Murphy. They had two children; Marissa and Brent. Bob, a good “ole” country boy, worked all his life until retirement. He began his business career in St. Louis, Missouri as an auditor with Deloitte Touche and was a member of the Missouri Society of CPAs. The Byrd family moved to Louisville, Kentucky in 1965 when Bob became a Comptroller with Dolly Madison Industries. The highlight of his business career was the 27 years he worked for Keller Manufacturing Company in Corydon, Indiana. He retired in 2001 as President and CEO. He enjoyed and counted as friends the management team at Keller. The trucking division of Keller, the lumbar buying trips, the visits in the manufacturing plants with employees were important to him. He was a finalist for the Kentucky/Southern Indiana Entrepreneur of the Year in 1994 and 1995. Bob loved the game of golf and played many rounds with great foursomes over the years, always the competitor. He and Carole were lifelong members of Hunting Creek Country Club and Santa Rosa Golf and Beach Club. The family will treasure memories of Florida beach trips, Missouri trips to see family, running road races with the Hunting Creek Running Club, breakfast outings afterwards, lake trips, water skiing with family and friends, and bicycle riding with Carole. Bob was survived by his loving wife and best friend Carole, the best of children, his daughter Marissa Gardner (Kevin), son Brent Byrd (Ann), wonderful grandchildren Robert and Alexandra Gardner, Courtney Hunborg (Austin), Matthew Clark (Katie), great grandsons Cason and Axel, three sisters Bernice Wilfong, Glenda Pitts, Janet Shannon (Mike), sister-in-law and brother-in-law Anna and Jim Murphy, first cousin Paul Byrd, Aunt Rose Ann Cocita, and numerous nieces, nephews, relatives, and friends. Bob will be remembered as a loving husband, father, grandfather, brother, and friend. The family will receive guest from 3-7 pm Thursday, June 4, 2020 at Pearson's, 149 Breckenridge, with a private memorial service In lieu of flowers please donate to the Parklands of Floyds Fork, Dare to Care or a charity of choice.

Robert Walter Byrd of Prospect, Kentucky passed away peacefully Monday June 1, 2020 at Kindred Hospital in Louisville, Kentucky. He was born on November 6, 1935 in Crossroads, Missouri to Pearl and Walter Byrd. He was a graduate of Farmington... View Obituary & Service Information

The family of Robert Walter Byrd created this Life Tributes page to make it easy to share your memories.

Send flowers to the Byrd family.