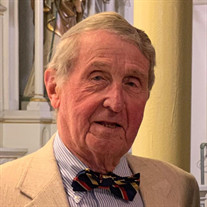 Richard Carl Palmer, 86, of Louisville passed away peacefully on Thursday, June 25, 2020 with his family by his side, after a month-long battle with cancer. He was a native of Louisville, born on August 30, 1933 to Carl W. and Gladys Breunig Palmer. Richard was a graduate of duPont Manual High School and the University of Louisville, where he was a member of Lambda Chi Alpha Fraternity. He retired from Porcelain Metals Corporation as Purchasing Manager in 1995. Richard was a proud member of the German American Club, the Filson Club, University of Louisville Women’s Basketball Fast Break Club, the Parrish House and the House of Cards. He enjoyed poetry, baseball, cooking, cheering on all UofL teams and being with his family and many friends. He was predeceased by his parents, Aunt Thelma Breunig, sister-in-law Virginia Mason, brothers-in-law Francis Simpson and Richard P. Schuster, and niece Connie Connelly. Richard is survived by his wife of 58 years, Charlene Remke Palmer; his beloved daughter Paige Nejman and her husband Erik, his cherished grandchildren Elizabeth and Will Nejman, all of Chicago, IL; sister Carol Palmer Schuster of Louisville; sister-in-law Nancy Simpson of Denver, CO; nephews Beau Schuster (Amy), Chris Schuster (Dan Forte), Maxson Schuster, all of Louisville, and Jay Connelly (Ginny) of Charlotte, NC; as well as numerous Palmer cousins and his extremely close friends, Richard Mather, Gary Hunter and Al Parrish. His funeral service will be held at 10 a.m. on Monday, June 29, 2020 at Pearson’s, 149 Breckenridge Lane, with burial to follow at Cave Hill Cemetery. Visitation will be from 1 - 4 p.m. on Sunday, June 28, 2020 at Pearson’s. In lieu of flowers, the family requests memorial gifts be made to Hearing Loss Association of America (Kentuckiana Chapter – PO Box 6372, Louisville, KY 40206), the American Cancer Society or a charity of your choice.

Richard Carl Palmer, 86, of Louisville passed away peacefully on Thursday, June 25, 2020 with his family by his side, after a month-long battle with cancer. He was a native of Louisville, born on August 30, 1933 to Carl W. and Gladys Breunig... View Obituary & Service Information

The family of Richard Carl Palmer created this Life Tributes page to make it easy to share your memories.

Send flowers to the Palmer family.