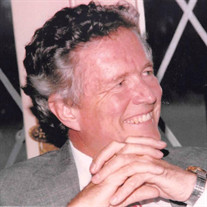 Richard "Dick" Lewis was born on December 26, 1926, in Columbus Junction Iowa. He was born in the home of his grandfather, Dr. Samuel J. Lewis, who also delivered him into the world. His family soon relocated to Chicago, Illinois, where he lived until adulthood. Upon his graduation from Proviso High School he enlisted in the U.S. Navy and served until the conclusion of World War 11. He then attended Elmhurst College, and Northwestem University, while attending Northwestern he met a fellow student who was to become his wife, Constance "Connie" Feldman. He graduated from Northwestern in 1950 and married in June 1951. After graduation Dick joined the General Electric company and worked through a series of managerial and executive positions in finance, sales, and distribution until he retired in 1986. In retirement Dick turned his attention to several civic and philanthropic activities in Louisville. Providing educational opportunities was a passion he and Connie began to work closely with the University of Louisville to establish an endowment fund to enable students and faculty to live and study in Latin America. He also served several years on the Education Committee of the Louisville Committee on Foreign Relations. He also devoted his time to Catholic Charities and Kentucky Refugees Ministries teaching "Survival English" to recent immigrants. Dick also served as an arbitrator for the Financial Industry Regulatory Authority (FINRA) and served on the Foster Children Independent Party Review Board, which assisted judges in the Family Court system. He was an avid tennis player and spent many years enjoying competition and making great friends at The Louisville Boat Club. He is survived by his beloved wife, Connie, and his daughter, Susan Lewis Mortimer of Palm Beach, Florida. He is also survived by his grandchildren, Richard Lewis Bierbaum and Caroline Bierbaum LeFrak of Miami, FL. He has six great-grandchildren. He was predeceased by their daughter, Patricia Lewis Sutton. Special Thanks to Hoparus for their kindness and help. A celebration of his life will be held at a later date.

Richard "Dick" Lewis was born on December 26, 1926, in Columbus Junction Iowa. He was born in the home of his grandfather, Dr. Samuel J. Lewis, who also delivered him into the world. His family soon relocated to Chicago, Illinois, where he... View Obituary & Service Information

The family of Richard "Dick" Lewis created this Life Tributes page to make it easy to share your memories.

Send flowers to the Lewis family.